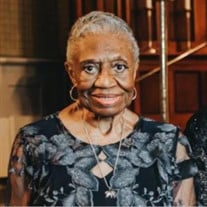 Life Reflections Lavinia B. Young, daughter of the late Monroe Francis Hackney and the late Harriet Ellen Hackney, was born September 29, 1926, in Baltimore, Maryland. Our Family Matriarch peacefully departed this life on April 30, 2022, in the comfort of her home surrounded by family. Lavinia received her education in the Baltimore City Public School System and attended Morgan State University. She met and married the late William Burrell, Sr. and from that union, she had two sons: William Jr. and Robert, and two daughters: Terry and Nyla. Later, she met and married James Young, and from that union, she had two daughters: Denise and Yasmin. Lavinia was baptized at a young age at Shiloh Baptist Church and attended various churches during her childhood, one being Orchard Street Methodist Church. She also served as Sunday school teacher. She converted to Catholicism 58 years ago and began attending Saint Gregory the Great. Later, she attended Saint Bernardine Roman Catholic Church. Her favorite scriptures were Psalms 23, 27, and 100. For many years, Lavinia was a devoted nurse at Montebello State Hospital. She was driven by a passion to help others and retired from nursing after many years of dedication. She loved traveling the world with family and friends. She relished the extensive international visits she made to Austria, Canada, the Caribbean, England, France, Germany, and Iceland. She especially enjoyed jazz shows, dinner theaters, dancing, entertaining, modeling, and spending quality time with her family. Lavinia was a sassy fashionista and a jazz connoisseur. Lavinia was preceded in death by her siblings, Alice L. Brown, Monroe L. Hackney, and Edward A. Hackney Sr. Lavinia leaves to cherish with fond memories: four daughters, Terry R. Burrell, Nyla R. (Burrell) Walters, Denise Young, Yasmin D. Young-White; two sons, William Burrell, Jr., Robert T. Burrell; 24 grandchildren, 3 of which she helped to raise, Kenyetta Martin, Renate Young, and Jamie Young (Godchild); 27 great-grandchildren and 12 great-great-grandchildren; a good friend, Geraldine Johnson; a special niece, Janis M. Davis, whom she helped deliver and name, and a host of other relatives and friends. Her earthly journey is over, but she has made another journey to a place where she will never grow old, she will weep no more, there will be no more pain, and she will know no more sorrow. She has journeyed to her final home where the streets are paved with gold.

The family of Lavinia B Young created this Life Tributes page to make it easy to share your memories.

Life Reflections
Lavinia B. Young, daughter of the late Monroe...

Send flowers to the Young family.