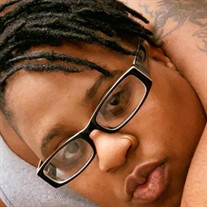 Obituary The righteous perish and no one ponders it in his heart, devout men are taken away and no one understands that the righteous are taken to be spared from evil. Those who walk uprightly enter into peace: they find rest as they lie in death. Isaiah 57:1-2 LaTarsha Dominique Taylor, affectionately known as Tasha, gained her wings on August 2, 2021, at Chippenham Hospital. She was born the daughter of Victor Allen Taylor and Tamara Vontez Harris Taylor. She was the second of 5 children. She was educated in the Henrico County School system and in 2013 graduated from Varina High School. LaTarsha was raised in a Christian home and at an early age, she developed a strong sense of family and compassion for others. LaTarsha accepted Christ at a young age. From birth she attended Union Level Baptist Church and was baptized at the age of 9. She served in the Youth choir and the Dance Ministry. She also danced the art of Mime in Praze Place School of the Arts under the direction of Pastor Geri Gatling. LaTarsha inherited a great sense of care in her services in Customer Service. She currently was working at Maximus for a year and before that Teleperformance Inc., as a Bank customer service representative. LaTarsha had a loving wonderful relationship with her fiancé DeAndré Arrington who she shared time with for two years. She also shared the leadership of their car club, Mixed Ambitions. There she served as the First Lady for 9 months. LaTarsha was a sweet, compassionate young lady who shined a light on everyone she came in contact with. She was a true example of the reflection of God’s love and the servant nature of Christ. Matthew 5:16 (AMP) sums her life as saying, “Let your light shine before men in such a way that they may see your good deeds and moral excellence, and [recognize and honor and] glorify your Father who is in heaven.” LaTarsha was predeceased by her maternal grandparents Milton Sr. and Clarice Harris and her uncle Milton Harris, Jr. Surviving she leaves her parents, Tamara and Victor Allen Taylor; 4 sisters, Monique, Victoria, Veronica, and Tamera Taylor; a loving God-sister Jasmine Baker; paternal grandparents, Raleigh and Ruby Deshazor; 3 aunts, Cynthia (Gus) Williams, Mittie (Keith) Graves, and Pamela (Carl) Russell; uncle, Rodney Deshazor; God-parents, Pastor D. Edwin Whitehead and First Lady LaDonna Whitehead. She also leaves a host of great aunts and uncles, cousins, and close family friends.

Obituary The righteous perish and no one ponders it in his heart, devout men are taken away and no one understands that the righteous are taken to be spared from evil. Those who walk uprightly enter into peace: they find rest as they lie in... View Obituary & Service Information

The family of LaTarsha Dominique Taylor created this Life Tributes page to make it easy to share your memories.

The righteous perish and no one ponders it in his heart,
devout...