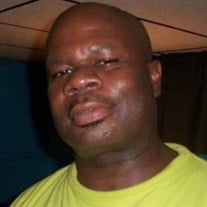 LARRY DEAN PLAYER was the youngest child born to his proud parents, Marie D. and Thomas Player, on October 13th, 1965 at Johns Hopkins Hospital. At an early age, Larry accepted Christ into his life as Personal Savior. He joined the Southern Baptist Church here in Baltimore, Maryland and was baptized by the late Rev. Dr. Nathaniel Higgs, Sr. As an active member, he loved singing and sang on the former Higgs Specials which was a young male chorus named after his pastor. Larry was educated in the Baltimore City Public School System. He graduated from Patterson High School in June, 1983. He then went on to become gainfully employed with several companies throughout his lifetime. In his later years, he went to school and obtained his CDL License. That gave him the opportunity to drive long distance trucks and tankers which he loved doing. Larry enjoyed playing sports on neighborhood pick-up teams while growing up in East Baltimore. He was well loved and known for his very affectionate SMILE which captivated everyone whom he came into contact. He loved to dance with his very funny moves and entertain everyone with his very funny sayings and jokes which would have you cracking up laughing. He was the LIFE of every party, family reunion and special event which he attended. He LOVED his family; especially his children and grandchildren. Spending quality time with them was always an enjoyable experience. He was preceded in death by his loving and devoted parents, Thomas and Marie D. Player; his only sister, Thomasina Regina Player; his oldest brother, Christopher Davis his granddaughter Khloe Player and grandson Kylek Joseph. Early on Wednesday, April 14th, 2021 morning, Larry transitioned from here on earth to eternity. Larry’s life will forever be cherished and celebrated by his two sons, Larry Dean Player, Jr. and Marcus, C. Player; one daughter, Gail Joseph; four grandsons Keshaun Player, Khalil Joseph, Kristian Joseph, Kollin Player and Deontae Joseph; one granddaughter Kealynn Player; two brothers, Sherman O. Player and Nolan K. Player; one son-in-law, Larry Joseph, speical friend Micshell Player and a host of nieces, nephews, other relatives and friends.

LARRY DEAN PLAYER was the youngest child born to his proud parents, Marie D. and Thomas Player, on October 13th, 1965 at Johns Hopkins Hospital. At an early age, Larry accepted Christ into his life as Personal Savior. He joined the Southern... View Obituary & Service Information

The family of Larry D. Player created this Life Tributes page to make it easy to share your memories.

LARRY DEAN PLAYER was the youngest child born to his proud parents,...

Send flowers to the Player family.