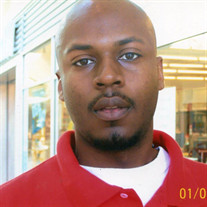 Kevin Garrod Jefferson It was while Thomas and Alberta Jefferson were enjoying the third of five exciting years as principal and teachers at the Greenville, Mississippi Junior Academy that we were blessed to have Kevin come into our lives. Kevin was born in Greenville, MS on October 22, 1980. His presence in our family made our home complete. Upon moving back to Richmond, VA in 1985, Kevin entered the Ephesus Day Care Center and proceeded year after year, grade after grade through the Ephesus Junior Academy. He was baptized at age seven by Pastor Steven Boyce. After his eighth grade graduation, he entered Richmond Academy where he played the drums in the band. His proclivity to music led him to play the violin in the Richmond Children’s symphony. He spent two years at Pine Forge Academy in Pine Forge, PA, graduating in 1999. Singing in the choir brought out the best in him. Upon graduation, Kevin went on to continue the family legacy by enrolling in Oakwood College, now Oakwood University. Health issues brought him home after two years. As a child, Kevin would spend hours watching Justin E. Wilson, a cajun-inspired humorist and chef. Justin was known for the catch phrase, “I gar-on-tee (guarantee). All of a sudden his interest in cooking surfaced. Soon he was competing with his mother as a very good cook. This led him to enroll in the Virginia College course of study in the Culinary Arts. Graduating in 2015 gave him much joy. Living in New York City was a childhood dream that became a reality when he secured a job at a five-star restaurant. The job was very challenging and after about two years health issues brought him home again. Those who knew Kevin loved him. He could be the life of the party or an introvert depending on who was with him. He had a talent for imitating voices that would keep you in stitches. Kevin leaves to cherish his memories his parents, Thomas Eugene Jefferson, Jr. and Alberta Joseph Jefferson; five aunts: Florie B. Johnson of Buffalo, N.Y.; Leola J. Fields and Sarah J. Archer both of Richmond, VA; Marguerite J. Wells of Tampa, FL; Neelie A. Thomas (Alexander) of West Palm Beach, FL, three uncles: William Jefferson (Catherine) of Baltimore, MD; Harry Jefferson of Richmond, VA; James Jefferson (Sharon) of Amelia, VA; a god-brother: Jeremy J. O’Neal of O’otewah, TN and a host of relatives and friends. Kevin: “The peaceful and gentle one.” Thank you for your obedience, sensitivity, generosity, sense of humor, and for just being you. Forever in our hearts, Mom and Dad

Kevin Garrod Jefferson It was while Thomas and Alberta Jefferson were enjoying the third of five exciting years as principal and teachers at the Greenville, Mississippi Junior Academy that we were blessed to have Kevin come into our lives. Kevin... View Obituary & Service Information

The family of Kevin Garrod Jefferson created this Life Tributes page to make it easy to share your memories.

It was while Thomas and Alberta Jefferson...

Send flowers to the Jefferson family.