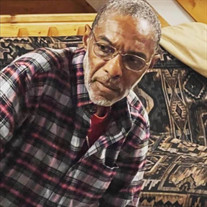 KENNETH BERNARD SURGEON, son of Samuel Myers and the late Juanita Surgeon, was born on January 8, 1955 in Saint Stephen, South Carolina. He departed this life peacefully on February 3, 2022. Kenneth was affectionately known to family and friends as Kenny, Box, GP and Pops. He moved to New York in 1964 where he received his education in the New York City Public School systems. Upon completion of high school, he continued his education to become a Certified Machinist. He developed interest for the Metal working industry and obtained knowledge of materials, equipment, and machine maintenance. In 1976 he met his soul mate Phyllis and out of this union three beautiful girls were born. In 1983 Kenny relocated with his family to Baltimore, Maryland where they made their home. Kenny was known for his compelling charm, integrity, generosity, and devotion to help others. He enjoyed an abundance of activities aside from working. In his free time Kenny enjoyed fishing, spending time with his grandchildren and peaceful days of just lying-in bed watching his favorite TV shows. Kenny was a jack-of-all-trades, but his top specialties were cooking, being able to brighten up anyone’s day with a simple smile, a little trash talk or his infamous one-finger-two-step-dance moves. Kenny enjoyed listening to many artists when it came to music but Tupac’s “To Live and Die in L.A.” and “California Love” were his favorites. Aside from his many interests and hobbies, he was also a big seafood lover. He loved seafood so much he had plans to one day own his very own seafood restaurant that would specialize in a plethora of seafood choices. Although Kenneth had plans bigger than anyone could see, God’s plans were even bigger. On February 3, 2022, Kenneth was called onto Glory to rejoin his late wife Phyllis D. Jones-Surgeon. While Kenneth is now in a better place, he leaves to mourn: three daughters, Kenyatta, Kawanna and Monique; three sons-in-law, Troy (Kenyatta), Aaron (Kawanna) and Marc (Monique) of (Maryland); one aunt, Pat; (Florida); two uncles, William Surgeon (Dub) and Hayes Surgeon (Buddy) (North Carolina); four grandchildren, Tomesha (Kenyatta), Dontae (Kawanna), Deara and Irish (Monique); two cousins who were more like siblings, Kirk and Kevin; nieces, nephews and a host of other relatives and friends.

KENNETH BERNARD SURGEON, son of Samuel Myers and the late Juanita Surgeon, was born on January 8, 1955 in Saint Stephen, South Carolina. He departed this life peacefully on February 3, 2022. Kenneth was affectionately known to family and friends... View Obituary & Service Information

The family of Kenneth Bernard Surgeon created this Life Tributes page to make it easy to share your memories.

Send flowers to the Surgeon family.