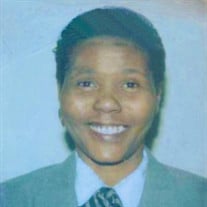 Kathy Delores Holmes-Wilson was born on December 16, 1961, to the late Edward Holmes and Rachel Holmes in Baltimore, MD. She transitioned from this earthly life after a lengthy illness on October 5, 2021. She received her education at Paul Laurence Dunbar High School in 1979. Then went on to Dorothy B. Lane Secretarial School. Kathy worked various jobs working as a security officer at Hopkins hospital, worked a Paramount Limousine service, cashier at Stop Shop and Save market just to name a few. Kathy received Christ and was baptized at an early age, joining the Rising Sun Baptist Church. She was very active in the church and song with the Running Voices of Joy and Mass choir. She later joined the Zion Baptist Church where she helped in the kitchen and sang in the Choir. She was also an active community board member of the Oliver Association. She enjoyed cooking, making jokes, fussing out people but she loves to see the family together when she would have cookouts for nieces and nephews’ birthdays. Kathy was a perfectionist when it came to ironing and very neat in her clothes. Kathy loved so many and was loved by so many more. She is preceded in death by her brother, Pastor Carl V. Williams, Sr.; her sister, Rachel D. Williams; and God-brother, Anthony Rose. She leaves to cherish her memory: her husband, Tyrone Wilson; one son, Gregory Jones; three granddaughters, Gabriella, Rachel, and Taniyah; loving and adoring mother, Rachel Holmes; three brothers, Wayne, Preston, and Douglass; one sister, Alease Holmes; three sisters-in-law, Sheilah, Katherine, and Desiree; one brother-in-law, Michael; three stepsons, Tyrone Jr., Brian, and Paul; and a host of nieces, nephews, cousins, family, and friends.

Kathy Delores Holmes-Wilson was born on December 16, 1961, to the late Edward Holmes and Rachel Holmes in Baltimore, MD. She transitioned from this earthly life after a lengthy illness on October 5, 2021. She received her education at Paul... View Obituary & Service Information

The family of Kathy Holmes-Wilson created this Life Tributes page to make it easy to share your memories.

Send flowers to the Holmes-Wilson family.