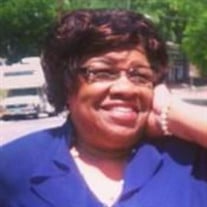 Our beloved, Julia Mae Moore Simmons was born June 10th,1942 in Halifax County, North Carolina. She transitioned to eternal rest on May 18th, 2021 in Richmond, Virginia. Julia was born to Robert Lee and Bessie Moore, Julia's mother died during childbirth, leaving her and her brother, William Ivy Moore, to be raised by the late Sylvester Brown and the late Carrie Dickens brown. Julia graduated from Brawley High School in Halifax County, North Carolina in 1961. Julia relocated to Richmond, Virginia, where she met and married William David Simmons. Their union produced four children, Gilda, Sharon, Daryl, and Carmita. Julia lived a life of Christian Service. She was a dedicated servant at Great Hope Baptist Church, where she served on the Usher Board for many years. She served faithfully, even as her health declined. In her early years Julia enjoyed singing as a member of "The RC Spirituals," which was a gospel group composed of family members. Julia loved being a member of this group, despite her inability to clap and rock at the same time. Julia known to some as Jut,Judy, Ms. Judy, Julia Mae, Miss Simms, Auntie, Aunt Judy, Grandma and/ or Grandma Simmons, was a legendary icon of Richmond. She worked tirelessly at Becky's Restaurant for over 50 years. She was known as an enthusiastic worker with a loving heart for those she served. She welcomed members of the General Assembly and many other elected officials who visited Richmond and wanted a good place to eat. And of Course, it was Becky's with a special request for Julia. Julia brought forward a strong passion for her kids, church, family, neighbors, cooking, gardening, and was appreciative of love from all. Ensuring that everyone was taken care of and happy brought Julia a sense of purpose and meaning in life. She lived the verse "do unto others as you would have them do unto you." Julia was preceded in death by her parents and daughter, Carmita Ramona. She is survived by her three children; Gilda (Whalen III), Sharon and Daryl; two brothers; William Ivy Moore (Phyllis) and Robert Moore; five grandchildren; Tyvon, Sharita, Turquoia, Daryl Jr., and Mya, one niece, Annessia Moore;one living nephew: Damon; one uncle, Cornelius Moore an one aunt, Dorothy Jones:devoted cousins, Dorothy Hawkins, Lesterine Whitehead, Marilyn Whitehead, Tybias Whitehead, Artencia Hawkins-Bell, Dr. Greta Hawkins-Mathis and a host of other relatives and special friends, among them; Gloria Gray, Violet Jackson, Cookie Watts and Gloria Wright.

The family of Julia Moore Simmons created this Life Tributes page to make it easy to share your memories.

Send flowers to the Simmons family.