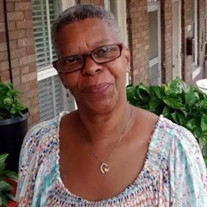 JUDY CAROLE MARTIN was born on November 23, 1952 in Baltimore, Maryland to the late Pastor James Williams Sr. and the late Pastor Minnie Williams. She departed this life on Wednesday, October 20, 2021 at home. Judy was known to most of her family and friends as “Sugie”. Sugie was educated in the Baltimore City Public School System. Prior to graduating, she had her first child, Yolanda. She went on to become a 1971 Graduate of Fairmont Hill High School where she studied sewing. Sewing led her to a career as a seamstress at London Fog Coats. During her 20+ years at London Fog she had another daughter, Yvonne and went on to meet her husband James Martin. Out of that union came the last of Sugie’s trio, Christine. Sugie and James were married 27 years before he preceded her in death. Sugie’s strong spiritual upbringing was expressed through the love and kindness she expressed to all she came in contact with, especially her family. She worked hard to keep her family together through her annual cookout that everyone couldn’t wait to attend. When she wasn’t catering to her family and friends, she was doing what she absolutely loved to do, sing and dance. During her time after London Fog, Sugie’s love for children led her to becoming a daycare provider to her grandchildren and other neighborhood children. She nurtured, strengthened, and encouraged the kids that she interacted with daily. Sugie was a selfless person that would help and assist anybody that was in need. She was the definition of an Angel on earth and her love and kindness will be truly missed. Sugie Leaves to cherish her memory: three daughters, Yolanda Williams, Yvonne Williams and Christine Johnson, which produced twelve grandchildren and nine great-grandchildren; son-in-law, Clifton Johnson; stepdaughter, Tarsha Beazer; five siblings, Minnie Nelson, James Williams Jr., Mary Stanley, Charlie Williams and Myrtle Porter; two brothers-in-law, Luther Stanley and Leonard Boazman; two sisters-in-law, Carry Hubbard and Veda Boazman; special friend, Mr. James Washington;and a host of nieces, nephews, cousins and friends. Her brother John Williams preceded her in death

The family of Judy C. Martin created this Life Tributes page to make it easy to share your memories.