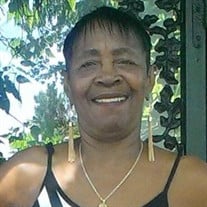 Legacy of Life “When you’ve done everything you can do, that’s when GOD will step in and do what you can’t do.” 2 Corinthians 12:10 Juanita A. Spurlock, daughter of the late Otis Anderson and Isabel Baylor was born August 18, 1943, in Caroline County. She resided in Richmond, VA until she entered eternal life, Wednesday, January 26, 2022. She was preceded in death by her husband, Douglas L. Spurlock. She was educated in Bowling Green, VA Public School System, and graduated from Union High School in 1961. Juanita received Christ at an early age at 2nd Mt. Zion Baptist Church in Dawn, VA. She was employed by S&H Cleaner as a Presser for several years until she retired. She formerly worked at Tuckahoe Cleaners and Cool Lane Cleaners as a Presser for over 30 years of dedicated service. She was a caring, loving wife, mother, grandmother, and friend. She was full of life and enjoyed listening to old-school music and sitting outside on her porch with her family and friends drinking a cold one. Having a house full of people made her day. Juanita will be remembered for her forgiving spirit, cooking, and providing a welcoming home and heart to many of us. She was “Mama Nita” to everyone and she was not one to passed judgment. She excepted you for who you were and she was always her true self - raw and unfiltered, but always with good intention. Juanita leaves to cherish her memory: daughter, Shelia Spurlock-Tupponce (Langston) and son, Kim Spurlock (Fredrica); step-daughter, Katina Pollard; god-daughter, Shadonna Bethel and her two children, A’sunay and Aniya; eight grandchildren, Nakia (Paul Sr.), Juawain, Brandon, Marcus, Cheyenne, DaShonda, Javon and Chase; seven great-grandchildren, Paul Jr., Sean, Cionna, Gabrielle, Mya, Loren, and Skylar; four siblings, Mary Fells (Wesley), Edith Winfield (George); Laura-Mae Gill, and Sherman Anderson (Betty); four sisters-in-law, Elsie Barner (James), Ernestine Wills, Blanche Jackson (George) and Shirley King (Bernard); four brothers-in-law, Howard Spurlock, Elvin Spurlock (Gwendolyn); Robert Spurlock (Gertrude) and Curtis Spurlock (Corliss); and a host of other relatives and friends.

The family of Juanita Anderson Spurlock created this Life Tributes page to make it easy to share your memories.

“When you’ve done everything you can do, that’s...

Send flowers to the Spurlock family.