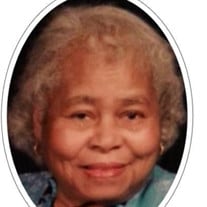 Josie Little live stream links for Facebook & YouTube Facebook: www.facebook.com/WBC3001 YouTube: www.youtube.com/channel/UCRoQEcfdv5x0PPDCELYSTSQ On Saturday, May 8, 2021, God’s Clarion call went out to draw MRS. JOSIE B. LITTLE (NEE HUNT) to Himself. She immediately responded and took flight to the heavenly realm. She was the tenth of eleven children born to the late Mr. Junious Andrew Hunt and the late Mrs. Annie Hunt (Nee Dudley) the last of her siblings. She was educated in the Pitt County North Carolina school system. and excelled academically. In 1941, at the invitation of an older sister, Mrs. Little migrated to Baltimore, Maryland in the midst of WWII; factory jobs were prevalent but proved too much for Josie. So, her passion for cooking landed her a job as a cook in a Greek restaurant, greatly enhancing her culinary skills and passion for cooking. Many migrants from North Carolina lived in the same neighborhood including the Late Mr. Willie James Little who recognized Josie from their grammar school days. They entered a courtship that consummated in marriage on August 17, 1945. From that union six children were born. While nurturing her small children, Mrs. Little attended a nearby church, Holy Trinity United Holiness Church of America, where she accepted Christ. In 1955, she united, actively, with Perkins Square Baptist Church; there she sang soprano on the Sunday School Choir under the direction of the Late Joseph Saunders, served diligently on the Frank R. Williams Memorial Circle, The Star of Bethlehem Ministry, the White Cross Nurses, the Ladies Guild and as chairperson of the Culinary Ministry. In addition, for one year, Mrs. Little chaired the Home- coming celebration and two years, the Women’s Day annual celebration, all to the Glory of God! In 1988, Mrs. Little was led to unite with the Whitestone Baptist Church, on Christian experience, by letter from Perkins Square Baptist Church. After completing the New Member Classes, she became a member of the Gertrude Bagley Nurses Unit and served as chairperson for three years. Josie became an ardent member of the Sunday School Ministry and faithfully attended the Saturday morning Bible Study sessions. Upon joining the Super Sixties Senior Ministry, Mrs. Little assisted the Late Rev. Walter Brown, Jr.; eventually, she was appointed Directress and served, outstandingly, for several years. Mrs. Little was an avid reader and writer, as well; several of her articles appeared in the Baptist Voice Newsletter. Her love for cooking led to the establishment of a catering business but finally, her dream of living in a brand new senior apartment was realized when she and the Late Mr. Willie James Little moved into the Randallstown Villa Coop, for seniors. Decorating her new apartment and making new friends energized Mrs. Little, motivating her to become the volunteer floor representative (east) and to teach the Bible Study group at Randallstown Villa Coop. In 2011, After 65 years of marriage, the love of her life, the Late Mr. Willie James Little transitioned from life to reward. Now, the Late Mrs. Josie B. Little, our beloved Mother, Grandmother, Great-Grandmother, Great-great Grandmother is mourned by six children, Dr. Dolores L. Holland, Mrs. Zelda Johnson, Mr. Rayner L. Little (Bernadine), Mr. Wayne Little (Shellae), Ms. Myrna L. Little, Tonya Jones (Lloyd) and Mr. Rudolph Little (Juanita)who preceded her in death; eighteen grandchildren including Mr. Wayne Little, Jr. who precede in death, twenty-four great grandchildren and six great-great grandchildren, including the infant death of Jody Reaves as well as numerous relatives and friends. Mrs. Josie B. Little lived a Faith based Life, modeling the Role of a true Matriarch touching the lives of everyone she came in contact with, her employers, neighbors and friends. “Precious in the sight of the Lord is the death of His saints.” (Psalm 116:15) (KJV)

The family of Josie Bell Little created this Life Tributes page to make it easy to share your memories.

Send flowers to the Little family.