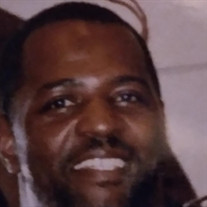 On Sunday, October 10, 2021, JOSEPH ROGERS received his call leaving us to tell his story. Joe was born on October 12, 1952 to the late Clarence and Mable Rogers. He received his education in the Baltimore City Public Schools, graduating from Paul Laurence Dunbar High School in 1970. Joe was employed by C&P, Bell Atlantic and Verizon Telephone for thirty-seven years before he became ill. Every life has a beautiful story. Joe’s started when he met Joyce Creighton and they had a beautiful baby girl named Sabrina. She was the apple of his eye. Joyce and Joe were married and also had two sons from their union. Later Joe had a baby boy named Devante Rogers. Joe loved his children and his grandchildren unconditionally. He had his own slick style of dressing. He loved to dance and listen to music especially Frankie Beverly. He would gather all the nephews and take them out on the weekends to Old Town Mall and the Inner Harbor. He touched so many lives and will truly be missed. Preceding Joe in death are his parents, Clarence and Mable Rogers; sisters, Denise Rogers and Michele Hawkins; and his oldest brother, Clarence D. Rogers Jr. Joe leaves to cherish his memory: his daughter, Sabrina Rogers; sons, Joseph D. Rogers, Sean Rogers and Devante Rogers; nine grandchildren; three brothers, Kenneth (Marcella), Dennis (Sheila), and Tyrone; sisters, Shirley, Bertha (Robert), Gladys and Tanya (Quinton); aunt, Linda Scribbens; special friend, Linda Ethridge; extended family, The Whitleys; and a host of nieces, nephew, other family members and friends.

On Sunday, October 10, 2021, JOSEPH ROGERS received his call leaving us to tell his story. Joe was born on October 12, 1952 to the late Clarence and Mable Rogers. He received his education in the Baltimore City Public Schools,... View Obituary & Service Information

The family of Joseph Rogers created this Life Tributes page to make it easy to share your memories.

Send flowers to the Rogers family.