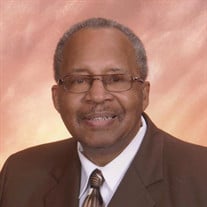 JOSEPH LEE LANGSTON, the first of eight children of the late Rufus and Ardelia Langston, was born in Baltimore, Maryland on September 19, 1937. On Thursday, March 11, 2021, after a lengthy illness, he was called from earth to glory to rest in heavenly peace. He was raised in Baltimore City by two religious and talented parents, an artistic father and a musical mother. As a child Sunday School was mandatory, unless you were ill. From childhood, his relationship and love of God, the church and art was cultivated and lasted throughout his lifetime. He received his education in the Baltimore City Public Schools and graduated from Frederick Douglass Senior High School. After graduation Joseph attended Baltimore City Community College while also working. He later made a decision to enlist in the United States Army. He was honorably discharged. When Joseph returned home from the Army he secured employment with the UPS Company. Shortly after beginning his employment at UPS he married his sweetheart, Ann Margaret Holmes. From this union they had two children, Joseph Louis Langston and Kimberly Ann Langston. After retirement from UPS Joseph focused on his painting. He loved painting on canvas. Over the years he exhibited his artwork and sold many paintings at Druid Hill Park and many other art shows and venues. Joseph also painted special paintings for family and friends for their new apartment or home. He also did special requests in the colors of choice. Joseph lost his beloved wife suddenly in 1996. Although this was a painful loss, he continued to serve God, his dedication to the church and he also continued with his artwork. Joseph was a member in good standing at New Psalmist Baptist Church under the leadership of Bishop Walter Scott Thomas, Pastor. Joseph served faithfully for many seasons, first as a Deacon and then a Trustee until his illness incapacitated him. He was not able to continue the job that he loved so much. He loved God and his assigned positions and gave his best. He was preceded in death by his wife Ann Margaret; parents, Rufus Sr. and Ardelia Langston; four brothers, Thomas Langston, Gary Langston, Tyrone Langston and Rufus Langston; and one sister, Ardelia Avery. Joseph leaves to cherish his memory: children, Joseph Louis Langston, Kimberly Ann Langston and Christopher Langston; two sisters, Blanche Borden and Linda Harmon; and a host of nieces, nephews, other relatives and friends. Joseph Lee Langston, lovingly known as Crick, was truly loved by all who knew him. He will be greatly missed

JOSEPH LEE LANGSTON, the first of eight children of the late Rufus and Ardelia Langston, was born in Baltimore, Maryland on September 19, 1937. On Thursday, March 11, 2021, after a lengthy illness, he was called from earth to glory to rest in... View Obituary & Service Information

The family of Joseph L. Langston created this Life Tributes page to make it easy to share your memories.

JOSEPH LEE LANGSTON, the first of eight children of the late...

Send flowers to the Langston family.