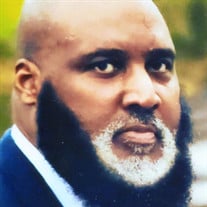 JOSEPH W EDWARDS, SR., son of Joyce Edwards was born on April 20, 1968. On May 10, 2021, our savior called him home to eternal rest after a short illness. Joseph A.K.A “Colonel” as family and friends knew him but called him their big brother although he was the only child. Those who knew me, know where and how I was educated, and who I worked for and what I did; because if you really knew what I did then I failed the world. The Colonel (A.K.A Top) as he was called was a very loved and devoted son, father, husband, cousin, uncle, and friend. Joseph enjoyed spending time with his clan as he called them. He enjoyed being at the gun range and was a gym rat. He just loved to have fun. He leaves to mourn wife, Tracy Edwards (Doll, Ms. Hawkins); mother, Joyce Edwards (Bunny, Jack); one son, Joseph Edwards, Jr (Mook); two daughters, JoJuan Edwards, and Ziquiara Edwards (Kira); bonus kids, Phillip Lucas, Kyron Smith (Hollywood), Megan Smith, Morgan Smith, and Courtney Smith; two bonus god-children, Brandon Evans and Ny’laya Evans; 8 grandchildren, Ky’reonna Edwards, Ayden Edwards (Busta), Cailyn Lucas, Masen Garrison (Master Masen), Ayden Smith (Lil Ayden), Christopher Edwards, Zayden Pace and Josiah Lucas (JoJo); one half brother and sister; four cousins he was fond of Alcelia, Tyronea , Donald Jr. (Spanky), and Carlos; and a special group of brothers called BLACK KNIGHTS; one special stepson, Carl Jemir Cromartie (Animal); close friend, Karla Cromartie; a very special sister, Andrea; and a very special cousin, Sharon Dutton; along with a host of family and friends.

The family of Joseph Williams Edwards Sr. created this Life Tributes page to make it easy to share your memories.

Send flowers to the Edwards family.