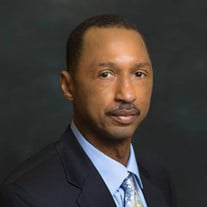 Legacy of Life “When you’ve done everything you can do, that’s when GOD will step in and do what you can’t do.” 2 Corinthians 12:10 John Thomas Wright, Jr., 60, of Glen Allen, departed this life, Friday, January 14, 2022. John was born November 25, 1961, in Lynn, Massachusetts. He attended Mitchell Junior College and later furthered his education at Virginia Union University, where he earned a B.S. in Business Administration and Management in 1988. He pledged Alpha Phi Alpha Fraternity, Gamma Chapter, in Fall of 1985. John joined Allstate Insurance Company as an Allstate Agent in 1990, later becoming an Allstate Agency owner. He was self-employed for 32 years, achieving Honor Ring 10 years and National Conference award in 2017. We, the family, would like to thank his loyal clientele down through the years. John was an active and dedicated member of North Gayton Baptist Church, where he served in Ushers and Men’s ministries. John loved the outdoors; landscaping was one of his favorite things to do. He was an avid Boston Celtics and New England Patriots fan and enjoyed attending his children’s many sporting activities. He was always there at practices and games cheering them to victory. He was preceded in death by his parents, Daisy and John Wright, Sr.; siblings, William and Jermont Washington. He leaves to cherish his memory a loving and devoted wife of 29 years, Deldra Wright; one daughter, Courtney Wright; one son, Zachary Wright; siblings, Patsy Bryant, Denise Washington, and Joan Wright; a host of nieces, nephews, and other relatives. A precious one from us is gone; A voice we loved is still. A place is vacant in our home Which never can be filled. It hurts us so to lose you but you did not go alone, for a part of us went with you The day God called you home.

The family of John Thomas Wright, Jr. created this Life Tributes page to make it easy to share your memories.

Legacy of Life
“When you’ve done everything you can do, that’s...

Send flowers to the Wright, family.