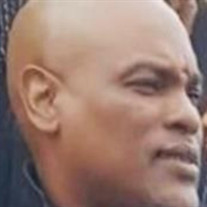 John Robert Williams, affectionately known as "John John", son of Paul Williams, was born on November 13, 1967, in Baltimore, Maryland. He departed this life on June 28, 2021, after a lengthy illness. John John received his education in the... View Obituary & Service Information

The family of John Robert Williams created this Life Tributes page to make it easy to share your memories.