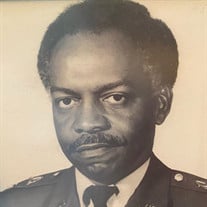 Legacy of Life John Edward Cunningham, Sr. was born on January 11, 1934, in Richmond, Virginia to Roosevelt Cunningham, Sr. and Mary M. Cunningham. He was preceded in death by his wife Delores T. Cunningham and his daughters Johnita Lynn Cunningham-Brown and Christie Y. Cunningham-Mayo. John began his formal education in the Richmond Public School system as a graduate of Maggie L. Walker High School where he was a key player on the football team. He furthered his education at Virginia State College (now Virginia State University) where he graduated with a Bachelor of Science degree. John earned a Master of Business Administration Degree from Virginia Commonwealth University and also continued his civilian education while in the military by attending George Washington University. He accepted Christ as his Savior at an early age and was a lifelong member of Third Street A.M.E. Church where he previously served on the Trustee Board for over twenty-seven years. John was united in holy matrimony with the late Delores Troublefield on May 27, 1954 in Richmond, Virginia. Their union was blessed with four children. John entered the United States Army after being commissioned as a 2nd Lieutenant upon graduating from the Virginia State ROTC program and advanced to the rank of Colonel. He received many awards and honors and spent several tours of duties in the Far East and at the Pentagon. After retiring from the U.S. Army with over 30 years of service, he became a Federal employee in the Position of Deputy Director of Computer Operations at the Defense General Supply Center Information Processing Center, where he also retired after many years of employment. In his leisure, he enjoyed reading and looking at documentaries about historical events and serving his community. He was a member of many organizations including Kappa Alpha Psi Fraternity, Inc., Club 533, and the Hanover Chapter of the Virginia State University Alumni Association. He leaves to cherish his memory one son, John E. Cunningham Jr.; daughter, Delores Karen Cunningham-Garland (Rickie); three adored grandsons, Gregory Brown (Rakeshia), David Mayo, and Adrian Richardson (Sadaya); five caring granddaughters, Catherine Cunningham, Ericka Garland, Christina Garland-Frias (Benito), Sierra Garland and Kelly Mayo-Langley (Robert); eight great-grandchildren and one on the way; devoted niece, Deborah Kenney; a host of other relatives and friends.

Legacy of Life John Edward Cunningham, Sr. was born on January 11, 1934, in Richmond, Virginia to Roosevelt Cunningham, Sr. and Mary M. Cunningham. He was preceded in death by his wife Delores T. Cunningham and his daughters Johnita Lynn Cunningham-Brown... View Obituary & Service Information

The family of John Edward Cunningham Sr. created this Life Tributes page to make it easy to share your memories.