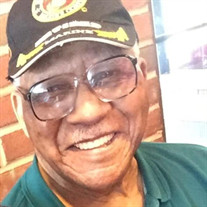 John Moses Cunnningham was born on May 30th 1933 to the late Robert Sr. and Mary Cunningham in South Boston, Virginia. John, better known as “Pop Pop” by his grandchildren, peacefully transitioned home to be with the lord on Wednesday, September 15th . John received an education in the Halifax County Public School System. At the age of eight-teen he joined the United States Marine Corps. John went on to become a sergeant in the U.S Marines, he often reminded everyone by saying “Semper Fi”. After completing his duty in the Marines, he began working for Sparrows Point Steel Mill, where he became a supervisor for the overnight shift. He never let his family forget that he was the “Head Foreman” of the Baltimore City Grand Jury. John was a jack of all trades and a master of only a few. In 1959, he met Elizabeth Watkins and they wed on December 22nd 1959. From their union Valerie and Vivian were born. After retiring in 1991, John spent his time gardening, watching baseball, gambling, visiting his siblings and niece. John joined Epworth United Methodist Church in 1981, he was part of the Methodist Men's Group and Security Ministry. John was an excellent patriarch who would go above and beyond to support his family. He enjoyed spending time with his family and most of all playing taxi for his grandchildren. John was also a devoted caregiver to his late wife. John was preceded in death by his wife Elizabeth, daughter Vivian, siblings Willa Mae, Frank, Robert, Alease, Richard and great-granddaughter Kali-Rose . He is survived by daughter Valerie Cunningham, grandchildren, Lekisha Ford, Paige Anderson, Patrice Anderson, Trevor Cunningham, De’Anna Anderson and great-granddaughter Kaliyah Morene. John also leaves to mourn sister’s in-law Fannie Cunningham, Josephine Ferrell, and brother-in-law Thomas Ferrell. In addition to a host of beloved nieces, nephews, and his furry companion Blossom.

John Moses Cunnningham was born on May 30th 1933 to the late Robert Sr. and Mary Cunningham in South Boston, Virginia. John, better known as &#8220;Pop Pop&#8221; by his grandchildren, peacefully transitioned home to be with the lord on Wednesday,... View Obituary & Service Information

The family of John Moses Cunningham created this Life Tributes page to make it easy to share your memories.