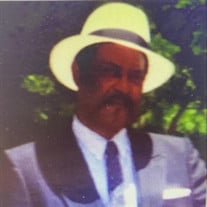 JOE LOUIS WARD was born September 22, 1934, in Holland, Texas to the late Chester and Cora Ward. Joe was the third child of seven siblings. He departed his life Thursday, March 17, 2022, at Loch Raven V.A. Medical Center. At an early age, Joe attended the Crestview Christian School, in Temple, Texas. He graduated from Dunbar High School in Texas. Joe spent 20 years in the Army before receiving a medical discharge in 1970. He served in the Korean War and did three terms in Vietnam, where he received several military honors. Joe was an avid sports fan. He enjoyed watching baseball, football, and boxing, but his true joy was watching “Westerns” and his grandson playing in the NFL. Shirl (Ida) and Joe enjoyed 52 years of marriage; they knew from day one that they would be together forever. Tey gave each other the world. Tey shared many ventures together. She treated him like a KING. Each day she prepared his breakfast, lunch and dinner with love. He was a great husband and provider. Joe was not only Shirl ‘s best friend – but a great man, loved by many. He loved Long John Silver and Subway which was his favorite fast-food restaurants. He will be genuinely missed by friends and family. He was preceded in death by his parents, Chester and Cora Ward; sister, Pearl Jenkins; brother, Chester Ward Jr.; and daughter, Jonice Ward. He leaves to cherish his memory: his wife, Ida B. Williams-Ward; brother, Curtis C. Ward of Dallas, TX; sisters, Velma Hinton of Dallas, TX, Thelma Staten (Julius) of Phoenix, AZ and Lynn Kelly of DeSoto, TX; son, Joe Gregory; daughter, Wanda Watkins; adopted kids, Stephanie, Nicole, Pat and Sandra; several nieces, nephews, grandchildren and great-grandchildren; special niece and nephews, Shalita, Albert Jr. and Terrence; godchildren, Cynthia and Laverne; special friend, Wayne; and a host of other relatives and friend

The family of Joe L Ward created this Life Tributes page to make it easy to share your memories.

Send flowers to the Ward family.