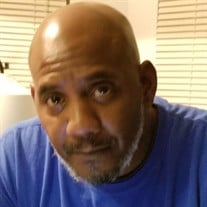 Jody Days Sr. of Richmond, Virginia went to be with the Lord on January 24, 2022. Jody was born on April 3, 1971, to Olivia Bryant and Father John Bryant of Richmond, VA. He attended Henrico County Public Schools. Jody fell in love and later married, Lora. They were the best of friends and loved each other dearly. He was the “peanut butter” to her “jelly”. If you were ever looking for Jody, you could find him fishing, roaming the aisles of Lowe’s, or at Rosie’s with his wife. Jody loved his family. They meant more to him than anything else in the world and there was nothing that he would not do for them. Jody worked hard and was determined to provide for his family, giving them the life, he felt they deserved. Jody was so very proud of his children. He was proud to see his youngest off to college, furthering his education, attending an HBCU and he was proud to witness and be a part of his two eldest finding true love and getting married. Jody also loved spending time with his grandchildren. He was overjoyed about being a “Papa” and nothing could brighten his day or bring a smile to his face like seeing his grandkids. Jody was a hard worker and was great with his hands. He loved building and fixing things. Jody could fix almost anything. He was a Jack of all trades and a master of them all. Jody was the go person for family and friends for any fixes needed around the house, from hanging a picture, painting, or building a deck; there was no job too big or small for Jody. Jody was employed as an Engineering Supervisor at Quirk Hotel Richmond. He took great pride in his position and proved himself an asset to the team and company, displaying excellent work ethics, quality of work, and dedication to the job. Jody was baptized at an early age and now rests in heaven’s glory. He leaves to cherish his memory, His loving wife, Lora Days, of 30 years. His children, Ebony Hatchett (Treyvon); Mark Days (Shanice); Jody Days Jr.; Parents, Olivia and John Bryant; Siblings, Linda Durant (Jeffrey); Maria Bryant; Jerome Bryant (Deborah); and Ronnetta Grant (Otis); Grandchildren, Tamya, Zion “Zyball”, and Khali “mama” Hatchett; In-laws, Milton and Lillie Beasley; Aunts, Mamie Fisher (Robert), Mozelle Parsons (David) and Louvenia Pride; Devoted friends, Stanley Cuffee, Jerquan Austin, Frank Lott, Brian Gray, and Reginald Smith; and a host of nieces, nephews, cousins, and friends.

Jody Days Sr. of Richmond, Virginia went to be with the Lord on January 24, 2022. Jody was born on April 3, 1971, to Olivia Bryant and Father John Bryant of Richmond, VA. He attended Henrico County Public Schools. Jody fell in love and later... View Obituary & Service Information

The family of Jody Chamod Days created this Life Tributes page to make it easy to share your memories.

Jody Days Sr. of Richmond, Virginia went to be with the Lord...

Send flowers to the Days family.