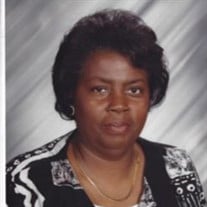 In the final hour of April 6, 2022, Joan Lee Simms Moore transitioned from this life to the next. She was preceded in death by her parents; siblings Liz, James, Charles, Rose, Lucille, Doris, John, Jr., Irene, and Randolph; and her beloved husband... View Obituary & Service Information

Services for Mrs. Moore will be live streamed at this link. https://www.facebook.com/CalvaryMtAiry/

Send flowers to the Moore family.