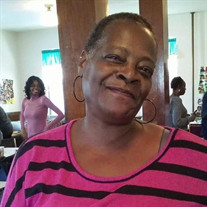 Celebration of Joan's Life A Time To Be Born Joan Woodley Green was born on March 1, 1955 in Richmond, VA to the late Richard and Margaret Woodley, Jr. A Time To Learn Joan Woodley Green was educated in the Richmond Public School System. She graduated from John F. Kennedy High School in 1973. From there, she went on to receive her CNA certificate from J. Sargeant Reynolds Community College in 1975. A Time To Build At an early age she accepted Christ into her life and was baptized at Cedar Street Baptist Church. From there she became one of God's faithful servant. She later joined East End Fellowship where she served until her journey ended. A Time To Love On March 15, 1985 she was joined in Holy Matrimony to Edward Green. Out of this union they produced two beautifitl daughters Ebony & Jasmine. A Time of Special Moments Joan was known for her infectious laugh. She loved shopping, singing & dancing. She was a giver at heart. Where she saw a need she stepped in to fulfill it. A Time To Die She was called to her Heavenly home on May 6, 2021 qf/er a short illness in her earthly body. She is preceded in death by her parents, Richard & Margaret Woodley, Jr.; brothers, Richard Woodley III, Nathaniel Williams and sister, Shirley Hassell. A Time of Peace Joan leaves to cherish her memory, her husband, Edward Green; daughters, Ebony White (Sam), Jasmine Green; one son, Edward Mcphatter; four grandchildren, Jevone Reed-Williams, J'Mari, Eli & Journey White; brothers, Ernest Lee Woodley, Robert Williams (Odessa), Alexander Johnson (Thelma); sisters, Doris Marie Woodley, Richetta Woodley Armstead, Delores Hunter; Devoted friend Pattie Robinson and Norine Hutchins; a host nieces, nephews, family and friends.

The family of Joan Green created this Life Tributes page to make it easy to share your memories.

A Time To Be Born
Joan Woodley Green...

Send flowers to the Green family.