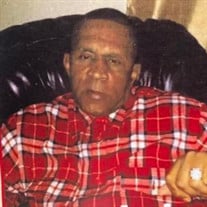 Jerry Lyles 2nd oldest son of the late Shirley Lyles and Jerra Lyles, was born on May 21, 1955. He departed this life on Monday, July 2, 2021. LIDDY, which his family and friends affectionately called him was one of 10 children; Michael Lyles, Kathy Lyles , Jeri - Lynn Dickerson, Stacey Lyles-Foster, Timothy Lyles, Mark Lyles and Jay Lyles. The late Gary Lyles , Wanda Lyles and Jerra Lyles, Jr. (Whom preceded him in death) LIDDY was one of a kind, he lived and loved life to the fullest. He loved to be with family and friends and loved a good meal during the holidays. He also had a great love for basketball and was one heck of a ball player on the court growing up in East Baltimore. Liddy was also very intelligent, loved to real books and could elaborate on almost any and many topics that were up for discussion. Oftentimes during our family gathers him and his sister-in-law Carolyn would have Great Debates and sometimes they would be hot and heavy, but all in love and whether he was right or wrong, you couldn’t tell he wasn’t “Master Genius” that knew it all. He was a very studious and conscientious guy. He received his high school diploma and although situations led him to be away from his family and outside world, he didn’t let that stop him. He earned a Bachelor’s and Master’s degree while being away in Hagerstown. Early in his young teenage years he met Avis, the love of his life at the time and from their relationship was born his pride and Joy, his daughter, Latisha L. Lyles. As time and years went on he met another love, Jessie and her family came his family as well. LIDDY leaves to mourn: his mother, the late Shirley C. Lyles (who preceded him in death); his father, Jerra Lyles, Sr. daughter, Latisha Lyles; grandson, JuWuan Hill; 6 brothers: Mikey, Timmy, Mark, Jay and Gary and Jerra, Jr.; who preceded him death a bonus daughter, Tynesa Wright; son-in-law Mike (Twin) 4 bonus grandkids, Dontrice, Montaz, Michael, Monteque, and 2 great grandkids, who he loved very much; 3 sister-in-laws: Carolyn Nelson, Francile Lyles, and Linda Blackston (Winnie, who preceded him in death); A special friend, Venus and a host of aunts, uncles nieces, nephews, and cousins.

Jerry Lyles 2nd oldest son of the late Shirley Lyles and Jerra Lyles, was born on May 21, 1955. He departed this life on Monday, July 2, 2021. LIDDY, which his family and friends affectionately called him was one of 10 children; Michael Lyles,... View Obituary & Service Information

The family of Jerry Lyles created this Life Tributes page to make it easy to share your memories.

Send flowers to the Lyles family.