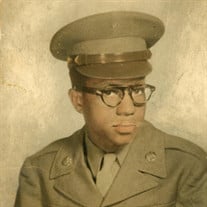 JERRY LEE GAYLORD was born on July 5, 1931 in Wintersville, North Carolina to the late George and Hannah (Moore) Gaylord. He departed this life on Sunday, May 1, 2022. Jerry attended elementary school in Greenville, North Carolina until the death of his father when he was thirteen years old which prompted his mother to move with her family to Baltimore, Maryland. He then continued his education in the Baltimore City Public School System. Jerry quit high school and went into the United States Army so that he could assist his mother with the support of his younger brothers and sister. He entered the military on March 2, 1948 and was discharged on February 8, 1952 as a Tanker Sergeant First Class. During his tour of duty he fought in the Korean Conflict while serving the 82D Airborne Division. He received a Korean Service Medal with three Bronze Stars and a Conduct Medal. Jerry returned to Paul Laurence Dunbar High School and received his diploma and graduated with honors after being discharged from the military. During that time he met and married the love of his life, Bessie Jean Peaton (His Dark Angel) of Baltimore, Maryland. He enjoyed spending time with his wife of sixty-eight years until his death. From this union six daughters were born. Jerry was a very industrious man who thought employment was a necessity. Some of his employments included working as a cab driver, for Martin Marietta and Burnett’s Mattress Factory which led to his retirement. This caused him to become a self-taught tailor, mechanic, wood-worker and all-around handyman. Jerry started assisting neighbors any way he could in 1973. He gave toys to little boys who were without, thereby giving him the name “The Toy Man”. He encouraged them to stay in school which sometimes meant taking them there. His relationships with the children led him to develop a relationship with the adults thus allowing him to become a confidante and friend. Jerry claimed Christ as his Savior in 1963 under the late Bishop Fred Page of Highway Church of Christ of the Apostolic Faith, Inc. In 1999, he experienced the moving of the Holy Ghost with the evidence of speaking in tongues. In his later life, he became a member of Anointed House of Prayer under Pastor Bessie Jean Gaylord. Jerry was preceded in death by two of his daughters: Shirlene (Spearman) Wilkerson and Virginia Gaylord. Jerry leaves to cherish his memory: his devoted wife, Bessie Jean Gaylord; five daughters, Jean Gaylord-Person, Bessie Small, Gerrie Johnson, Allison Gaylord and Nadina Stevenson; one son, Tyrell Holmes; fourteen grandchildren, a host of nieces, nephews, other relatives and friends.

JERRY LEE GAYLORD was born on July 5, 1931 in Wintersville, North Carolina to the late George and Hannah (Moore) Gaylord. He departed this life on Sunday, May 1, 2022. Jerry attended elementary school in Greenville, North Carolina until the... View Obituary & Service Information

The family of Jerry L Gaylord created this Life Tributes page to make it easy to share your memories.

Send flowers to the Gaylord family.