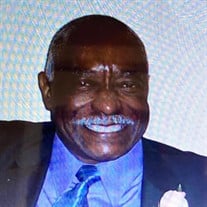 On the 13th of November 1934 in Baltimore, Maryland, the youngest son was born to William and Bessie Dent. They would name him JERRY EDWARD. Growing up Jerry would gleam much from his older brother Harold, who was like a father figure to him. Jerry would often find himself in opposition against the giants of life. A man of small stature and little education, which would be the fuel that would ignite the heart of a lion, earning him the nickname “Beast”. Jerry was resilient, relentless and had an untiring work ethic. He would often say “If it could be done by man, it could be done by me”. Jerry navigated several professions in his life. One being a “Meat Cutter” for A & P Grocery Store. After leaving A & P, he worked for Baltimore City Housing Authority, (BCHA). Jerry would work for BCHA, for many decades before retiring in 2004. Jerry’s entrepreneurial spirit, would be the inspiration for his ability to find available employment for those that were looking. Namely his Grandchildren. Jerry loved and cherished Pernell “Koot” Dent, his devoted wife of 61 years. They were inseparable, the meaning of the wedding vows, “Until death do us part”. Jerry adored his family. His driving force was the provision for his house and all that lived in it. Sometimes that would mean other children from other families. Jerry loved the Lord and his church, Star of Bethlehem A.M.E., where he and Sister Pernell were members, under the leadership of Pastor Marlene Mitchell. When his strength depleted and his steps became short, he and Sister Pernell would rarely miss Thursday night’s bible study via conference call with Unity Fellowship Ministry in Fayetteville, North Carolina. On 29 March 2022, Jerry E. Dent Sr. took leave of this earthly life to live forever in eternity. He would give up many hats he wore down here for a Crown in Glory. He was preceded in death by his parents, William and Bessie Dent; his brothers Jerome, George, Harold and Carl Dent; his sisters, Alfreda Dent, Irene Winder, Lorraine Sanders, and June Dent; his son, Andre "Bop” Dent, grandson, Andre Jones and granddaughter, Erica D. Fisher. In his teachings, you would hear him say “To know is to understand”. All his teachings ends this day, for he is in God’s hands! Brother Jerry E. Dent Sr. leaves to honor his memory: devoted wife, Pernell; four loving daughters, Oris Jackie Johnson (Isaiah Walker), Gayle Lee (late Russell Lee), Terri Allen (Marvin) of Baltimore, MD and Jeanette E. Gregory (Adolph) of South Carolina; dedicated son, Jerry E. Dent Jr. (Sandra) of North Carolina; daughter-in-love, Pamela Dent; two sisters, Dorothy E. Johnson and Adele Harmon of Baltimore, MD; sister-in-law, Louise Clayton (Melvin) of Washington DC.; brother-in-law, Thomas Hamilton (Sallyann) of Santee SC.; and a host of grandchildren, great-grandchildren, great-great-grandchildren, nieces, nephews, other relatives and friends and neighbors who admired him.

On the 13th of November 1934 in Baltimore, Maryland, the youngest son was born to William and Bessie Dent. They would name him JERRY EDWARD. Growing up Jerry would gleam much from his older brother Harold, who was like a father figure to... View Obituary & Service Information

The family of Jerry Edward Dent Sr. created this Life Tributes page to make it easy to share your memories.

Send flowers to the Dent family.