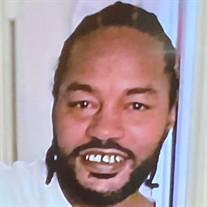 To our great GOD be the Glory...... On December 19, 1974 a son was born to the late Edward Lee Ash, Jr and Ray Ann Ash. With great joy they named him JERMELL JAKI ASH who was their first born. His parents enjoyed almost two fun years with him before welcoming his new love and what blessed and changed his world forever. One that he would bond with and the two became inseparable, his sister Tarnisha. Jermell lovingly known as “Chopper” to his family and friends attended St. Mary School and later the Baltimore City Public Schools. He was very family oriented and enjoyed family gatherings. Chopper was also an expert fisherman, hunter and a true boxer whom he learned all of these trades from his dad, Butch. Chopper was a wise, funny, stand up guy who truly loved his family. He was often looked upon as being adjutant to his younger family members because of how disciplined he was. That was just the protector in him. Later in life he would become a father to his eldest daughter, Brienna Ash. A few years later his life changed again when he welcomed his second daughter, Jernell Ash. Chopper was elated to welcome his one and only son, Jayden Ash whom he spoke so highly of. Then the youngest of his children, Jenasia Ash who was his baby girl who he often referred to as “pretty girl” arrived. He did his very best with molding her into the lovely young lady that she is today. With God’s help and love of family we will continue to support and love his children as he did. Chopper leaves to cherish precious memories: his faithful and loving mother, Ray Ann Ash; three daughters, Brienna Ash, Jernell Ash, and Jenasia Ash, one son, Jayden Ash; one grandson, Carter; two sisters, Tarnisha Ash and Ashley Ash Carroll (Brandon); two loving brothers who were inseparable, Devin Ash and Edward Lee Ash, III., two nephews who were more like sons and whom he spent a lot of quality time with, Jairus Ash and Joshua Hill; a special and loving uncle who was more like a second father and one who he would often refer to as his strongest soldier, Julian Ash, three aunts, Brenda Spriggs, Bernadette Anderson and Leslie Smith; two uncles, Gregory Smith and Calvin Ash; two special cousins who were more like uncles, Norman Spriggs and Sean Spriggs; a loving and devoted friend, Katrina Jones; nieces, nephews and a host of other relatives and friends. Chopper leaves a legacy of love, generosity, and devotion that will be sorely missed.

To our great GOD be the Glory...... On December 19, 1974 a son was born to the late Edward Lee Ash, Jr and Ray Ann Ash. With great joy they named him JERMELL JAKI ASH who was their first born. His parents enjoyed almost two fun years with him... View Obituary & Service Information

The family of Jermell J. Ash created this Life Tributes page to make it easy to share your memories.

Send flowers to the Ash family.