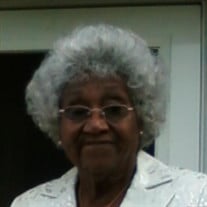 Legacy of Life Jeris Ophelia Thompson affectionately know as “Pauline” was the only child born to the late Alice Lafonde Stevens and John Leedom Jones in Plainfield, New Jersey on April 15, 1935. Jeris moved to Richmond, Virginia and was educated in the Richmond Public School System, attending Maggie L. Walker High School and furthering her education she attended The Jones School of Beauty for Cosmetology. She married Richard W. Thompson Sr., October 11, 1955 in Richmond, Virginia. She joined Shiloh Baptist Church under the leadership of Rev. Kilpatrick. She was a member of The Celestial Chorus and also sang with The United Gospel Singers. She loved performing at various churches in the Richmond area. God blessed her with a powerful, glorious, melodic gift. Her favorite singer was one of America’s influential gospel vocalist, Mahalia Jackson. She would sing her songs all day long and She would have everyone at home singing right along with her. Being a cosmetologist she worked with her husband as a stylist in his barbershop on Venable Street in Churchill. She was also employed by the Avady and Boswell families and worked at Thalhimers for several years as an Accuracy Auditor. After her husband retired from Byrd Press the family moved to Caroline County. Jeris lived a full and lavish lifestyle, her husband spoiled her and cherished her until his death. She is strength personified and was a phenomenal woman. Her legacy will live beyond her physical body. She enjoyed fashion, being with friends, music, shopping and traveling. She was a classy lady, very independent and would often travel to enjoy the ocean and its beauty. Jeris was preceded in death by her husband Richard W. Thompson, Sr.; her son, Steve Thompson; 2 granddaughters, Sharonda Hubbard and Constance Taylor. On Tuesday, April 13, 2021, she entered eternal rest peacefully with family by her side. The legacy of love she leaves behind is a caring family: Richard, Jr., Mary E., Lloyd A., James B., John L., Joseph W. and Irene P. Thompson; Antoinette Taylor, Clara James and Frances White; 3 daughters-in-law, Faye Thompson, Rosalyn Thompson and Stephanie Thompson; 1 son-in-law, Earl James; 16 grandchildren, 26 great-grands, and 2 great-great grandchildren; her extended family Tonya Jones, Wilma Murry, Michael Talbert, Diane Thompson and Carolyn Bruce Clark, along with a host of relatives and friends, including her beloved four-legged grandson “Biggie” who is missing her already. Our Girl Pauline God made a wonderful mother. A mother who never grows old. He made her smile of the sunshine and molded her heart of gold. In her eyes He placed bright shining starts. In her cheeks fair roses you see. God made a wonderful Mother . . . and He gave that dear Mother to me! –Penned by Symone T. White

The family of Jeris Ophelia Thompson created this Life Tributes page to make it easy to share your memories.

Send flowers to the Thompson family.