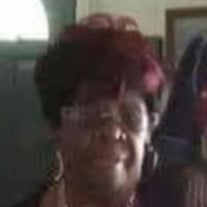 Jean Singleton Smithers, was born on July 29, 1941 to Elizabeth Smithers-Williams of Caroline County, Virginia. The only girl of 5 children. As a small child, her family were members of the Mt. Calvary Church. Jean enjoyed playing with her siblings and lived a pretty reserved life style. As a youth she moved to Richmond, Virginia with her mother and favorite Aunt Alma who was like her second mom. Oh how they loved each other. Jean met many people in her youth, her favorite being her sister from another mother, Ms. Linda Dean a.k.a “Bunny.” They were the best of friends and did almost everything together. If you saw one, then you knew the other was not far! As a young adult Jean graduated with a bachelor’s degree in Special Education. She started her career working with special needs students at Mary Mumford School in Richmond. She decided to start a family and had a son, Willie Williams. Jean later remarried her former husband, the late James Lee Winston. That reunion blessed them with 3 daughters, Jewel Williams, Carmella Winston and Mathalia Winston. Later in life, the stars aligned once again when she met Joseph and they fell in love. While on a vacation in Atlantic City, Joseph asked for her hand in marriage. Her response was, “Where we going to eat LOL”? Eventually, two years later she said “Yes.” Then on the bitter sweet day of her late daughter Mathalia’s 30th birthday, July 26, 1993, they officially married, becoming Mr. and Mrs. They went on to successfully raise two granddaughters Takeisha Williams and Shamalda Winston. She retired from teaching in the early 2000s. Jean was a very strong-minded and strong-willed woman. She battled breast cancer for many years and never let it get the best of her. She continued to live her best life enjoying clubs, Bingo, most of all shopping. Jean was a very jazzy lady! Her health began to decline and on the beautiful summer morning of August 23, 2021, she peacefully went to sleep in her forever home. Jean Redwood is preceded in death by her mother Elizabeth Smithers; aunt Alma Smithers; brothers, Jerry Williams and Otis Williams; children Mathalia Winston, Willie Williams and Carmella Winston; granddaughters Takeisha Williams and Tasha Williams. Jean leaves a legacy of love to be cherished by her daughter, Jewel Henry (Robert); grandchildren, Shamalda and Eugene Witherspoon, ShaMeka Winston, Willie Winston, Sasha Williams, Devin Williams, Devon Williams and Vashawn Williams; great-grandchildren, Mahlik and Makayla, Aaliyah, Devin Jr. and Mahki, Devon Jr., Sincere and Lyric, Olivia, Madison and McKenzie and Baby Tayveon (the families newest addition; brothers, Harry Linwood Smithers and Terry Smithers; honorary sister, Linda Dean; daughter-in-law, Lillian Winston; and a host of other relatives and dear friends.

Jean Singleton Smithers, was born on July 29, 1941 to Elizabeth Smithers-Williams of Caroline County, Virginia. The only girl of 5 children. As a small child, her family were members of the Mt. Calvary Church. Jean enjoyed playing with her... View Obituary & Service Information

The family of Jean W. Redwood created this Life Tributes page to make it easy to share your memories.

Send flowers to the Redwood family.