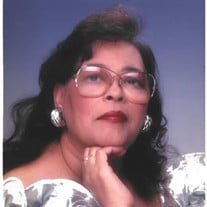 Jean Cooper, 88 passed away peacefully the of Tuesday, April 5th, 2022, with the love of her family surrounding her. Jean Cooper (Maiden name Howell) was born March 23rd, 1934, in Baltimore, Maryland to Thomas Howell and Lillian Howell. However, her name wasn't always Jean Howell, for many months her legal name was "BabyGirl Howell", because her parents could not decide what to name give her. Jean grew up the youngest of three, that is until her brother Harold was born when she was eight years old. At an early age Jean went to live with her uncle Jake in Hagerstown Maryland, she enjoyed living with her uncle and his family, and this is where she met her best friend who is also her cousin Melvin. As a teenager she spent her summers working at a summer camp as a camp counselor. She did very well in school, and her favorite subject was English, as she loved to write. Jean has aspirations of becoming movie star one day. Jean had four children, three who was born from the Holy Matrimony of her first marriage. (Thais, Pamela, and Charles Jr.) One child (Gary) who was born from the Holy Matrimony from her second husband James Cooper whom she was married to for forty-two loving years. One could say they were destined to be together, as they grew up on the same block as children but didn't meet until their adult lives. Her interest included home decor, baking, reading, crossword puzzles, playing BINGO and writing in her journal. She devoted much of her time and energy to taking care of her husband and family. Even though Jean was not much of a dancer she loved listening to music and enjoyed slow dancing with her husband. She leaves to cherish her memory; four children; 9 grandchildren; 12 great grand children; 2 great great grandchildren; sister Lenora; and a host of nieces, nephews, and other relatives.

Jean Cooper, 88 passed away peacefully the of Tuesday, April 5th, 2022, with the love of her family surrounding her. Jean Cooper (Maiden name Howell) was born March 23rd, 1934, in Baltimore, Maryland to Thomas Howell and Lillian Howell. However,... View Obituary & Service Information

The family of Jean Cooper created this Life Tributes page to make it easy to share your memories.

Jean Cooper, 88 passed away peacefully the of Tuesday, April...

Send flowers to the Cooper family.