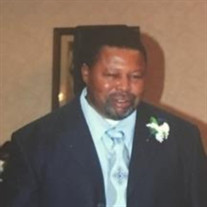 Legacy of Life James Lee Tucker,Sr. was born on February 18, 1946, to the late Charles and Marie Tucker of Wilson, North Carolina. James spent his young years in Wilson, North Carolina where he met and married, Johnnie Mae Tucker and had his first son, James Lee Tucker Jr. In his late 20’s, James decided to move to Richmond, Virginia for work and made Richmond his home. James met and married Patricia Tucker. They fell in love for 30 years and produced a family of 11 children. James retired and dedicated 30 plus years as a Supervisor Foreman with Southeast Recycling Plant. Throughout those years working at the Plant, he and his best friend, Stanley Green worked as the neighborhood mechanics. They dedicated their time bonding and working on cars. James loved his children, grandchildren, and family. He enjoyed the family time they always had. He also enjoyed cooking on the grill no matter the weather, while dancing, laughing and drinking. He will truly be missed and his love will be instilled in us forever. He is preceded in death by his loving wife, Patricia Tucker, his ex-wife, Johnnie Mae Tucker; sisters, Shirley Tucker and Betty Cox, and his brother, Charles Tucker. On Tuesday, June 1, 2021 James was called home for eternal rest. He leaves to cherish his loving and comedic memories to his sisters: Willistine and Kathy Tucker; sons, James Lee Tucker, Jr. (Elizabeth Tucker), Charles Tucker, James Junior Tucker of Richmond, Virginia and Michael Shaw; daughters, Clara, Sheryl, Paula, Jamie and Brenda Tucker; as well as Tella Crenshaw and Nancy Gresham, all of Richmond, Virginia; grandchildren, Joshua, Ayanna, Shaniya, Rayanna, Steven, Larry, London, Tiana, China, Trinity, Jamari, Amari, Charles Jr., King, Dallas, Jeshiah and Honesty; special relatives, Pamela Green, Catherine Gresham, Kirk Bynum and Tella Shaw; a host of family, other relatives and friends. We bow in humble submission to our Heavenly Father who doeth all things well.

The family of James Lee Tucker, Sr. created this Life Tributes page to make it easy to share your memories.

Send flowers to the Tucker, family.