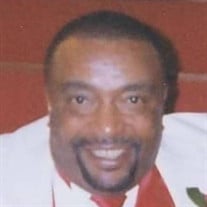 Legacy of Love In my Father’s House are many mansions; if it were not so, I would have told you. I go to prepare a place for you. John 14:2 James Edward Thompson, affectionately known as “JT”, was born on March 13, 1955, in Washington, DC, to the late John Harold Thompson and Jewel Royster Thompson. He was preceded in death by his brothers John and Henry Thompson. James received his formal education in the Richmond Public School system, attending Webster Davis Elementary, East End Middle, and Armstrong High Schools. He was employed by Richmond Redevelopment & Housing Authority as a Maintenance Supervisor, where he retired after 30 years. James was formally married to Velde Vincent (Hobson). Their union was blessed with three children, Andre’, Charita, and Kevin. James later met his life partner, Saundra Bates. From their relationship, he gained three bonus sons, Deon, Tyshaun, and Joel Bates. In his leisure, James enjoyed photography, cars, riding his many bicycles, his gun collection, and working out at Gold’s Gym. There he built new friendships with people that grew fond of his wisdom and infamous advice. “JT” also loved his music, enjoying music from all genres, from the likes of Earth Wind & Fire, Roy Ayers, Rufus ft. Chaka Khan, DMX, and Sade, to name a few. Most importantly, he was a lifetime devoted Pittsburg Steelers fan! You could catch “JT” on Sundays either at home on his favorite couch or at a local bar watching the games during football season, full of commentary about his beloved Steelers. He leaves to cherish his memory three children, Andre (Trijay) Vincent, Charita, and Kevin Thompson; a devoted life partner, Saundra Bates; sister, Jewel Thompson; six grandchildren, Eric, Ashley, Makaylah, Derek, Alex, and Gregory; one great-grandson, Ja’Kai; 11 bonus grandchildren, Zirriah, Tyonna, Tishaun, Tyshaun, King, Joe’l, Nevaeh, Jalaah, Semaj, A’Cory, and Brianna; two nephews, Henry Thompson, Jr. and Seth Walker; one niece, Sherry Thompson, and a host of other nieces, nephews, cousins, and friends, among them a devoted Robert “Coy” Vincent, Craig Dickerson, Arthur Moody, and Lorenzo Thompson. As you can see “JT” touched so many lives, too numerous to name. His legacy will be forever, and he will be missed dearly by many.

The family of James Edward Thompson created this Life Tributes page to make it easy to share your memories.

Legacy of Love
In my Father’s House are many mansions; if it...

Send flowers to the Thompson family.