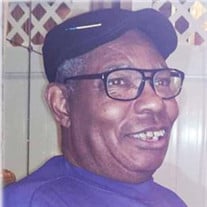 James Frederick “Bop” Neely, Sr. was born May 6, 1941 to the late Jesse James Neely and Versie Neely in Sharon, South Carolina. “Bop” as his family called him received his education in Sharon, South Carolina and loved working on cars. He later became an over the road truck driver and married the late Iris Mary Richardson of Baltimore, Maryland and from that union they had 4 children Jason, James, Jr., Nichelle and Heath. Neely enjoyed many things from riding motorcycles with the Charm City Riders to camping with the Maryland Van Council and his best friends, the late Effie and James “Spike” Harris, fishing, grilling, bowling and baseball with friends from Donald’s Bar. After becoming a member of the Road Master Vanners, he became known to many as the “Moon Dog”. Neely loved to cook and sing for everyone and after becoming a member of the Merritt Park Baptist Church in Dundalk, Maryland, he joined their choir. He was the singing Crab steamer. He was preceded in death by his son, Jason; grandson, Antonio; brothers, Ulysses Currence and Mozel Neely; and 3 sisters, Mildred Burris, Hattie Bankhead and Celestine Neely. Surviving to cherish so many years of love and memories is his wife, Delilah; sons, James Neely, Jr. and Heath Neely (Umi) of Japan; his daughter, Nichelle Watson (Lawrence); stepson, Harold Richardson (Tamara), stepdaughter; special granddaughters, Tkeyah and Brittney; grandsons, James Antonio and Heath Jr.; great-grandsons, Xavier and Hamza; other relatives and friends.

The family of James Neely created this Life Tributes page to make it easy to share your memories.

Send flowers to the Neely family.