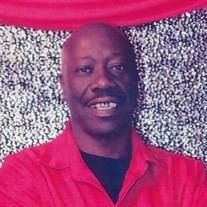 James “Kevin” McBride was born on June 4th 1959 in Baltimore, Maryland to the late Mary and Robert McBride. He departed life here on earth suddenly on April 4th 2021 after a brief illness. Despite the pain, James fought like the soldier he was and remained strong until the end. As a child, he loved to play basketball and fix things. He graduated from Carver Vocational Technical High School in 1978 where he acquired a skillset in electrical construction. James served in the United States Army from 1979 – 1982. He served an additional 3 years as a National Guardsman. He received several accolades, to include: medals, ribbons, Marksmanship, and Sharp Shooter badges. James received an Honorable Discharge from the military as a Sergeant. In 1986, he began a wonderful career at Medstar Good Samaritan Hospital. He absolutely loved his career there. His magnificent leadership skills propelled him into the role of Supervisor of Transportation. Additionally, he worked at Dismas House for 8 years. James was a great man with many talents and entrepreneurial endeavors. He excelled in everything he touched, from plumbing to electricity to carpentry. He was constantly learning and truly loved taking on new challenging projects. He would never let a task defeat him. If he did not know how to do something, he was always determined to work hard until he ultimately figured it out. He would help anyone, anywhere, and with a smile on his face. He will forever be remembered by his infectious laughter, remarkable sense of humor, strong work ethic, and “Go big or go home” mentality. He touched the lives of so many people and he will truly be missed. He is survived by his wife Leslie and his children: Kevin, LaKeisha, Keith, Kenny, Curtis, Britney, Sheana, and James Jr; step children: Troy, Tarhonika (Nika), and Christopher (CJ); siblings: Robert, Donald, Kathy, as well as the late Gloria and Elizabeth. He also leaves to mourn 24 grandchildren, 1 great grandchild on the way, and a host of in-laws, nieces, nephews, cousins, and friends.

James &#8220;Kevin&#8221; McBride was born on June 4th 1959 in Baltimore, Maryland to the late Mary and Robert McBride. He departed life here on earth suddenly on April 4th 2021 after a brief illness. Despite the pain, James fought like the... View Obituary & Service Information

The family of James Calvin McBride created this Life Tributes page to make it easy to share your memories.

Send flowers to the McBride family.