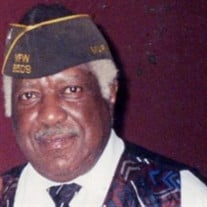 James W. Johnson Jr., son late James Johnson Sr., and Pinky Bell Johnson, was born on April 30, 1933 in Birmingham, Alabama. He departed this life on September 11, 2021. James received his education in the Birmingham, Alabama Public School System; he graduated from Hooper City High School in Birmingham in May 1950. Once he graduated from high school he worked for Hayes Air Craft. James enlisted in the United States Army on September 30, 1950 and was honorably discharged on September 30, 1953. James then attended Tuskegee Institute where he graduated with a Bachelor of Science degree. James moved to Baltimore, Maryland in 1959 and he worked for the Baltimore City Public School System for 33 years; he also worked for the Afro-American Newspaper for 30 years. James met and married Betty Ann Hill on August 16, 1963. From this union there were 3 children: Pierre, Sharon, and Antonio who preceded him in death. James became a lifetime member of the V.F.W. Post 8509 where he was a commander for 2 years. He also was a member of the military order of the Cooties. For many years he was a member of the American Legion. James leaves to cherish his memory: his wife, Betty Johnson; his children, Pierre Johnson and Sharon Johnson (Antonio Johnson preceded him in death); siblings, Dorothy Johnson and Clifford Johnson (Betty), (John Johnson preceded him in deate); grandson, Dejuan Crocker; sister-in-law, Minnie McDougal, Rebecca Hill, Antionette Cash and Lela Johnson-Brown (Barbara Sneed preceded him in death); brother-in-law, Keith Hill (Edward Hill preceded him in death); special nephew and niece, Roderick Johnson and Selandra Spigner; and a host of other nieces, nephews, and friends.

The family of James Willie Johnson Jr created this Life Tributes page to make it easy to share your memories.