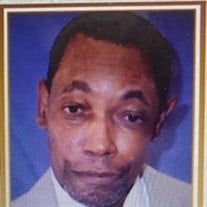 “Let not your heart be troubled: ye believe in God, believe also in me.”- John 14:1 JAMES G. EVANS, SR., son of the late Smith and Lelia Evans, was born on July 2, 1929 in Farmville, Virginia. He received his formal education in the public schools of Prince Edward County, Virginia. Upon his confession of faith, he was baptized at the New Witt Baptist Church in Farmville. In 1950, he entered into holy matrimony with the former Beatrice Allen. From this union, they were blessed with two daughters, Betty (now deceased) and Patricia and four sons, James, Jr. (Las Vegas, NV), George (now deceased), Ricky, and Roger. In 1956, Gee, as he was affectionately called, along with his late wife Bea, packed up their belongings and four children at that time and left Farmville headed to Chester, PA. The family made a stop in Baltimore for the weekend and the rest is history. He sought and obtained employment at the Bethlehem Steel Corporation where he worked for more than 20 years prior to retiring on disability. Gee loved music and was an avid guitarist. He loved to play the guitar and sing along with family and friends, especially his children. Two of his favorite musical selections that he loved to both play and sing were “Way Over Yonder” and “Talk About Jesus.” He also knew his way around the kitchen and could make a mean pot of beans along with homemade biscuits. Although he had a somewhat quiet demeanor, he loved to discuss politics and current news stories. He also enjoyed reading his Bible and studying God’s word. A longtime resident of Future Care at Good Samaritan, you could often find him in the lounge area amongst the other residents. On Saturday, May 15, 2021, God claimed His own and carried James G. Evans, Sr. on to glory to be with Him forever. In addition to his wife, parents and two of his children, five brothers, Charlie, George, Phil, John and Morton Evans, along with a grandson, Daivon M. Evans, preceded him in death. He leaves to cherish his memory: three sons, James Evans, Jr., Ricky R. Evans and Roger N. Evans (Gwen); one daughter, Patricia D. Evans; ten grandchildren; several great- and great-great-grandchildren; two sisters, Mattie West of East Orange, NJ and Alice Hines of Meherrin, VA; one brother, Rev. Hampton Evans of Chester, PA; several sisters-in-law, a host of nieces, nephews, and other relatives and friends. Lovingly submitted, The Family

The family of James G Evans Sr. created this Life Tributes page to make it easy to share your memories.

“Let not your heart be troubled: ye believe in God, believe also...

Send flowers to the Evans family.