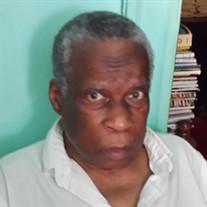 JAMES WILLIAM COLBERT, JR. son of the late James and Rosa Lee (Morris) Colbert, was born in Baltimore, Maryland on November 8, 1942. Following a lengthy illness, he passed from this world on November 14, 2021 to join family members who went before him. James graduated from Frederick Douglass High School. Following four years of service in the U.S. Air Force during the Vietnam conflict, he completed and Associate of Arts Degree at the Community College of Baltimore in 1972. His work life comprised employment as an engineering assistant for Western Electric Company, conducting destructive tests of electronic components; and as a line-printer operator for computing centers. Always known as quiet and reserved yet well-liked by everyone who knew him, James was also known for his love of trains, combat jets and model building. He spent countless hours in his youth wandering down to Baltimore's rail yards and train stations to watch and marvel at them, often trailed by his younger brother. His fascination with fighter jets led him to join the Air Force, where he served with distinction his tour duty in the Tactical Reconnaissance Wing at Mountain Home Air Force Base, Idaho. As an avid and talented model builder, he amassed and impressive collection of HO-gauge trains and accessories. His skill at building and elaborately outfitting and detailing his brass engines and passenger cars was remarkable; and his collection remains in mint condition. In addition, he developed a large collection of movies, including many cherished, cult-favorite, delightfully cheesy horror and monster movies that he and his brother replayed and laughed over regularly throughout his life. James provided comfort, support and a steady presence in the home he shared with his mother and aunts, Thelma Morris and Bernice Wineglass, remaining with them until they had all passed on. He subsequently enjoyed a solitary life in the home, pursuing his hobbies and eating far too much of his favorites: fried oysters, ice cream, cookies and the more-than-occasional Whopper. His mother and aunts were excellent cooks, but James nonetheless like his indulgences. Somehow, he always remained trim and reasonably fit. He is survived by: his brother, Isaac of Boston; first cousins, Eulalia (Ann) Harris-Lofton of Baltimore, Thomas Colbert of York, Pennsylvania, Ardeen Crawford of Charlotte, North Carolina and Doris Taylor of Baltimore.

JAMES WILLIAM COLBERT, JR. son of the late James and Rosa Lee (Morris) Colbert, was born in Baltimore, Maryland on November 8, 1942. Following a lengthy illness, he passed from this world on November 14, 2021 to join family members who went... View Obituary & Service Information

The family of James W. Colbert created this Life Tributes page to make it easy to share your memories.

Send flowers to the Colbert family.