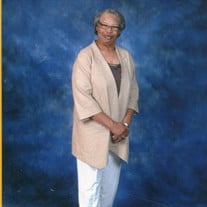 Legacy of Life Jacqueline Vanessa Turner the fifth of nine children born on March 15, 1946 to the late Clarise Hampton Holmes and Percy Edward Holmes, Sr. in Richmond Virginia. She was preceded in death by her parents; sisters, Iris L. Kenny and Earnestine A. Holmes; and brother, Percy Holmes, Jr. Jacqueline grew up in Varina and was a graduate of Virginia Randolph High School, class of 1964. She later obtained her Certificate of Completion from The Division of Vocational and Adult Education as a duplicating machine operator from Richmond Public Schools in 1965. After holding several jobs, Jacqueline was hired as a Bus Operator for the Greater Richmond Transit Company, where she retired. After retirement, Jacqueline dedicated her time to her beloved grandchildren. She was instrumental in making sure that they get to and from school daily. She also loved working as a Personal Companion Assistant (PCA), until her health began to fail. Jacqueline enjoyed being able to help others and bring joy to her patients and their loved ones. When Jackie wasn’t making everyone else around her feel special, she would go fishing with her father, Percy. When they were not successful on the fishing pier, they would hop on a charter boat with no hesitation knowing that neither one of them could swim. When her father passed away, she took up fishing with her nephew Edward. On March 5, 2021 at 9:00 pm, Jacqueline “Jackie” Turner was call home to live her eternal life with the Lord. She leaves cherished memories to her daughters, Vanessa and Barbara Holmes; foster daughter, Sylvia Snead; granddaughter, Richelle Hurdle; grandson, Richard Hurdle, Jr.; granddog, Snowflake; sisters, Gwendolyn H. Marsh and Dr. Marymal L. Holmes of Bowie, Maryland; brothers, Sherlock V. Holmes Sr., Purcell B. Holmes, Sr. and Randolph W. Holmes; brother-in-law, James Kenny; devoted friend, Delores Ballard; and a host of other relatives and friends. Jacqueline will be missed by all whose life she touched.

The family of Jacqueline Vanessa Turner created this Life Tributes page to make it easy to share your memories.

Send flowers to the Turner family.