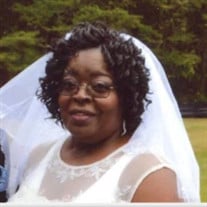 JACQUELINE “JACKIE” ANN FINNEY-MCMURRIN, youngest daughter of Levi T. Finney Jr. and Evelyn Ellis, was born on August 12, 1952 in Baltimore City. On Monday, May 3, 2021 Jackie entered eternal rest at Good Samaritan Hospital in Baltimore, Maryland due to long term and complex health issues. Jackie was educated in Baltimore City Public Schools, graduating from Forest Park High School in 1970. She chose to enter the world of work following high school. She worked for the federal government for a short period followed by a long career in Maryland State Government Social Services Administration-Income Maintenance in Montgomery County and Baltimore City and Department of Health- Medical Assistance. She retired from State Government at age 62. Early in her career in Baltimore City Income Maintenance she was selected for an educational program that led her to complete first her Associate of Arts degree from Baltimore Community College-Essex and Bachelors of Arts degree from University of Baltimore. On September 30, 2017, after a long courtship, Jackie married the love of her life, Curtis McMurrin. Having much in common, they were building their dream life together. He greatly brightened her life and expanded her involvement in social and charitable activities. Jackie was a feisty, determined and a consummate friend and family member your secrets were safe with her. One could be sure that she would give you her true opinion even when it was hard to hear. Jackie lived her life by the Golden Rule. She received her First Holy Communion and Confirmation from St. Peter Claver Catholic Church and was a member of the Dorsey Educational Fund, Inc., Advisory Board. She attended Bible Study at St. Gregory the Great Catholic Church. She was a member of The Dorsey Educational Fund, Inc. Advisory Board. It was easy to be around her because of her engaging personality, sense of humor and adventure, and joy of living. She loved hanging-out with family and friends. She loved vacations that were relaxing and going to diverse places; computer games, bus trips, shopping, watching QVC and Court TV. Jackie was preceded in death by: her mother (1976) and father (1984); brother Levi T. Finney III (2007); and her dear “Aunt” Florence Hargrave (2020). Jackie leaves to cherish her memory: husband, Curtis; sister, Carolyn Finney; cousins, Pauline Poulson, Goldia Henderson (Mark) and Anita Smith; “Godmother,” Louise Cole; and a host of godchildren, other relatives and friends

The family of Jacqueline A. Finney-McMurrin created this Life Tributes page to make it easy to share your memories.

Send flowers to the Finney-McMurrin family.