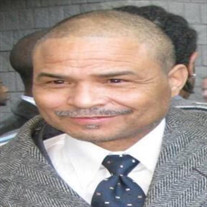 HOWARD “SMILEY” HAROLD CRADLE SR. was born January 25, 1956 in Ft. Benning, Georgia to the late Kidd and Carmella Cradle. He departed this life on Thursday, May 20, 2021 after a lengthy illness. Smiley received his high school education from Southern High School in 1975. Upon the completion of his studies, he embarked on a career in the United States Army in 1976 and was assigned to Fort Bragg 36th C Sigma Communication Battalion. Smiley showed his artistic abilities by creating logos for his battalion and creating artworks for his fellow soldiers. While stationed at Fort Bragg, he met the love of his life Tonida McLeod in 1982, and they married in 1984. Through their union they had one son Howard Jr. Once Smiley left the military, he sought employment with Cumberland County Schools in Fayetteville, North Carolina as a custodian until he relocated back to Baltimore, Maryland. Smiley’s number one joy in life was his artwork, especially painting. He used his creative eye to beautify the school grounds with his artwork. Students, teachers and faculty all loved him and his creativity. Smiley’s favorite hobbies were drawing and painting. He was recognized by President Clinton in 1996 for receiving a personalized portrait that was crafted by his gifted hands. Mr. Cradle painted special pictures of Buffalo soldiers that were displayed and sold at the PX at Ft. Bragg, NC. He was also gifted in using his hands to carve wood into masterpieces, create backdrop scenes for pageants and phenomenal 3-dimensional bulletin boards. Smiley’s memory will be forever carried in the hearts of: his wife (Tonida); son (Howard Jr.); daughter-in-law (Dainnese); brothers (Charles, Purnell and Marlon); sisters Diane and Inez preceded him in death; aunts, May and Roe (St. Louis, MO), Vivian (Baltimore); and uncle, Raymond (St. Louis). He also leaves one special granddaughter, (Donita); brothers-in-law, sisters-in-law, nieces, nephews, cousins and other relatives.

HOWARD &#8220;SMILEY&#8221; HAROLD CRADLE SR. was born January 25, 1956 in Ft. Benning, Georgia to the late Kidd and Carmella Cradle. He departed this life on Thursday, May 20, 2021 after a lengthy illness. Smiley received his high... View Obituary & Service Information

The family of Howard Harold Cradle Sr. created this Life Tributes page to make it easy to share your memories.

Send flowers to the Cradle family.