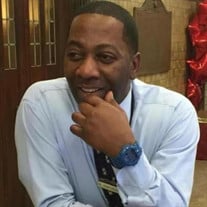 Legacy of Life Herman Rampersant, Jr., known as Fella by his family and close friends, was born on October 12, 1963, in Brooklyn, NY to the late Herman Rampersant, Sr., and Bertha Corine Sims. He was preceded in death by his brothers, Rodney Earl and Nathaniel, and a beloved son, Messiah. Fella received his formal education in the New York City public school system. He received his diploma from Job Corp in 1983. He furthered his education by receiving certifications for security cadet, welding, and in culinary arts in Bamberg, SC. Fella was united in holy matrimony with Janet Reynolds on August 11, 2004, in Newark, NJ. He was employed by Allied Universal, a security firm for 17 years. He was a district security manager of South Orange and Maplewood school districts and his last position was an assistant account manager. Fella was not a fancy person. He liked the simple things in life. He enjoyed bowling and going to buffets. Although Fella was very social, he was also a very private person. As he excelled in his work life and became a “Boss”, he never tooted his own horn. He was well respected by those he supervised as well as his colleagues. He is a perfect example of it’s not how you start but how you finish. Fella loved his family: sons, siblings, nieces, and nephews. If you called him, Fella would share his philosophy on life with you at length. Fella liked having fun, but he did not like a lot of nonsense and was quick to tell you if something was “B__ S___”. The love of his life was his wife Janet. When he met her, he knew she was the one, and about a month later they were married. His desire was to make her happy. They made an awesome team. On January 20, 2022, the Lord called him home. Leaving to celebrate Fella’s memory and to carry on his legacy are wife, Janet Rampersant; sons, Rommel Middleton, DeShawn Middleton, Sinclair Middleton, and Nathaniel Rampersant; seven sisters, Johannie Bert, Sharon Freeman, Debbie Lewis, Lawanda Johnson, Cherise Williams, Yolanda Rampersant-Simmons, and Nikole Smith; two brothers, Gevon Williams and Niguel Smith; two brothers-in-law, Danny Bert, and Joe Irvin Freeman; seven grandchildren, along with a host of nieces, nephews, cousins, and countless friends.

Legacy of Life Herman Rampersant, Jr., known as Fella by his family and close friends, was born on October 12, 1963, in Brooklyn, NY to the late Herman Rampersant, Sr., and Bertha Corine Sims. He was preceded in death by his brothers, Rodney... View Obituary & Service Information

The family of Herman "Fella" Rampersant Jr. created this Life Tributes page to make it easy to share your memories.

Herman Rampersant, Jr., known as Fella by his...

Send flowers to the Rampersant family.