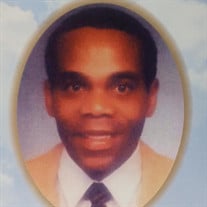 On Friday, April 16, 2021, HERMAN CLINTON CHEEKS, fondly known as Clinton, transitioned to be with his heavenly Father, at age 63. Clinton was born on September 12, 1957 in Baltimore, Maryland to Herman and Mary Cheeks. He was their “Baby Boy.” Clinton received his education in the Baltimore County Public Schools, and graduated from Dundalk High School in 1975. He was class president, an honor student and participated in school plays and other activities. He attended Columbia University in New York for three years. Clinton worked various jobs, including the Baltimore Sun, prior to no longer being able to work, due to illness. Clinton was baptized at the Galilee Baptist Church in Dundalk, Maryland at a young age. He was the pianist for the Fanner Youth Choir at the church, and pianist for other churches in the Turner Station community. Clinton loved God, and would say, “God is taking care of me.” Clinton liked to watch his favorite weekly programs, golf, tennis, and football, and was a faithful Ravens fan. He always had his Ravens blanket by his side, along with his candy, snacks, and ice cream. Clinton was a dedicated son, brother, and uncle, and deeply loved his family. Clinton didn’t have children, but loved his nieces and nephews. His giving spirit will always be remembered. Clinton would say something funny to make his family laugh. Clinton was preceded in death by his brother, Herman Eljah Cheeks Jr., and sister, Dianne Jenkins. Clinton leaves to cherish his memory: parents, Herman and Mary Cheeks, sisters, Rosetta Cheeks, Teresa Johnson, and Brenda Cheeks, brothers-in-law, Edwin Jenkins and Maurice Johnson, three aunts, two uncles, three nieces, three nephews, two great-nephews, and a host of other relatives and friends.

On Friday, April 16, 2021, HERMAN CLINTON CHEEKS, fondly known as Clinton, transitioned to be with his heavenly Father, at age 63. Clinton was born on September 12, 1957 in Baltimore, Maryland to Herman and Mary Cheeks. He was their &#8220;Baby... View Obituary & Service Information

The family of Herman Cheeks created this Life Tributes page to make it easy to share your memories.

Send flowers to the Cheeks family.