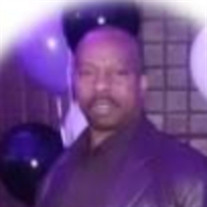 Herbert James King Jr. was born in Baltimore, Maryland on January 25, 1960. Herbert was first to be born of a fraternal set of twins. He was one of seven children bon to the late Herbert J. Sr. and Elsie V. King. God called our beloved Herbert home on April 13, 2021. Herbert, affectionately known as Junior was educated in the Baltimore Public school system. Over the years, he maintained lengthy employments with jobs he often told stories of. Most notably in his younger years, he was an Undertaker for Rucks Funeral Home and a cook for the historical Haussner's Restaurant. Junior was a hard worker worker; he was all about his money! At a young age, Junior accepted Jesus Christ as his Lord and Savior. He was baptized in the name of the Father, Son, and Holy Ghost at St. Paul Baptist Church. Although he was not religious he had a great faith in God. Junior's love for his children Tawaun and Terrell and his family was his most cherished blessing. He was the most affectionate person always giving hugs and kisses. He was the "life" of any party or gathering. He loved to have a good time. He enjoyed all genres of music and dancing. His laugh was infectious, you laughed either with him or at him. When you hear "Aye yo" you knew something hilarious was coming after it. Junior always stayed hydrated, carry around his plastic water bottle that never contained water. His daughter, Tawaun Wells King; son, Terrell King; parents Herbert J. Sr. and Elsie V. King; sister, Sheila T. Faulcon; and niece, Cheryl Y. Carter, preceded him death. Junior leaves to herish his memory: his grandchildren, Marcell Jamar, Mekiyah Juanita, Brielle Janai, and Te'Mar Terrell; great grandchildren, Royalty and Malachi; four sisters, Geneveive Nichols, Phyllis James (Edward), Constance Connie Douglass (Leander), Tammy Mosely (Howard) one brother John King; twenty-three nieces and nephews; thirty-six great nieces and nephews; fourteen great great nieces and nephews; four aunts, Bertha Wonson, Alma Jones, Etta Butler and Myrtine Jusher; one uncle, Alfred M. King; mothers of his children, Sharon King (Terrell) Loretta Wells (Tawaun); and a host of other family and friends. Junior's legacy will live on through his family and all that loved him.

Herbert James King Jr. was born in Baltimore, Maryland on January 25, 1960. Herbert was first to be born of a fraternal set of twins. He was one of seven children bon to the late Herbert J. Sr. and Elsie V. King. God called our beloved Herbert... View Obituary & Service Information

The family of Herbert King Jr. created this Life Tributes page to make it easy to share your memories.