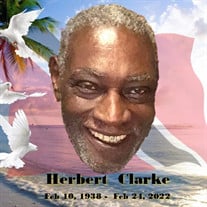 Herbert Clarke was born on February 10, 1938 in San Fernando, Trinidad and Tobago. He departed this earthly life on February 24, 2022. Herbert was preceded in death by his parents, Mary and Willoughby Clarke and daughter Roxanne Clarke. He was a loving and devoted husband and is survived by his wife of 48 years, Gemma Clarke. Herbert began his education at the Carapichaima E.C. School. He attended San Fernando Technical School where he studied Construction and Drawing. He was employed as Special Reserve Police for San Fernando Branch as well as the General Hospital Security Department. Herbert emigrated to the United States of America in 1970. He worked for the Baltimore City Housing Department as a Carpenter. Years later, he joined Amtrak as part of their Maintenance crew as a Carpenter. Herbert ascended the department's ladder and ended his employment there, and happily retired after many years of service. Herbert loved music and dance. He attended Arthur Murray Dance School of Baltimore where he received awards for his outstanding showcase of talent with his favorite style of dance being Ballroom. As he was a man of great ambition and passion for life, he began the development of Caribbean Culture. He promoted Preakness Semi-formal Dance and Weekend Extravaganza with guests from Pennsylvania, New York, New Jersey and the whole Northeast Corridor. This took place for 18 years. His movement became well known as the West Indian Ballroom Dance Club. In 1994, Herbert successfully organized his first Annual Bus Trip to Boston Mardi Gras “Caribbean Carnival”; it has now become an annual event that many people look forward to each year. Herbert was awarded a charter for Non-Profit Status for his organization, West Indian Dance & Cultural Association of Maryland, Inc (WIDICA) in 1996. Herbert, along with WIDICA was awarded a substantial amount of awards and recognition for his community involvement. In April of 2019, Mayor Jack Young awarded Herbert Clarke with a plaque of recognition of 30 years of dedicated service and cultural efforts in the community. Herbert was an inspiration to the youth in the community and did not mind sharing his life’s experiences with them. He began a Community Garden whose goal is to support healthy eating and a positive spirit within the community. Herbert dedicated great time planning Annual Garden Parties for family and friends. He was a Master Gardener and it was evident, his loving wife Gemma will continue her husband’s vision. Herbert was loved by many. To know him was to love him. Just seeing the passion that he had for perfecting his garden, a good game of cards and bird keeping could bring anyone joy! Herbert leaves to cherish his memory; his loving wife, Gemma, his children; Curt (Angel), Curtis, Seldon (Tricia), Cleve (Tamala) and the late Roxanne Clarke. Grandchildren; Alicia, Christopher, Brandon, Shyanne, Sierrah, Savannah, Sonoma, Shelina, Jada, Jene, Jennel, Curtianna, Junisha, Karis and Elijah; six great grandchildren; Robert A., Robert S., Rosa leigh, Justin, Kindness, and Ivy. Siblings; Cynthia, Winston, Anthoney, Joseph, Leonora, Maria, and Oswald; along with a host of nieces and nephews. Herbert also leaves behind his great friends, Dr. Abelullah, Trevor, Mr. Richard and many more. Herbert’s legacy lives on in the many hearts and minds that he touched in his time on this earth. He will be greatly missed.

Herbert Clarke was born on February 10, 1938 in San Fernando, Trinidad and Tobago. He departed this earthly life on February 24, 2022. Herbert was preceded in death by his parents, Mary and Willoughby Clarke and daughter Roxanne Clarke. He was... View Obituary & Service Information

The family of Herbert Clarke created this Life Tributes page to make it easy to share your memories.

Send flowers to the Clarke family.