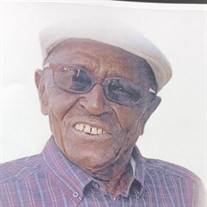 Henry Prioleau was born to the late Blossom Nelson and Robbie Prioleau on October 15, 1939 in St. Stephen, a small town in Berkeley County, South Carolina. After a courageous battle with a terminal illness, he transitioned peacefully at his home in Baltimore, Maryland, surrounded by his loved ones on May 13, 2021. Henry was the second eldest of nine children. He was raised i a Christian home, accepting Christ and being baptized at an early age. In 1957, Henry graduated from Russellville High School in St. Stephen. In 1959, Henry decided to move to Baltimore, Maryland to pursue work. He knew the meaning of hard work and dedication at a very young age. In his early years, Henry began working at The Nelson Company as a Foreman, where he dedicated twenty-five years of service. He later moved on to Triangle Pacific where he worked for ten years. In 1970, Henry was blessed with his first born daughter, Roslyn Simmons. In 1975, Henry met and developed a relationship and wonderful friendship with Ethel Saunders. The two of them fell deeply in love and were married on December 7, 1979. From that union came three children; Venina Mitchell, Yolanda Prioleau, and Henry Jose Prioleau. In 1997, Henry began working at Jarvis Steel & Lumber Company as a forklift operator, where he received tons of recognition for his hard work, up until he retired in 2002. Henry was a really relaxed and laid back person. He enjoyed playing his lottery, taking walks, and talking to his neighbors and friends. Henry will always be remembered for his words of wisdom, hard work, and tough love for his family. Henry leaves a loving legacy to celebrate his most precious memory and be cherished by: his wife, Ethel Prioleau; four children, Roslyn Wilson (Brandon Wilson), Venina Rice (Bruce Rice), Yolanda Prioleau, and Henry Prioleau (Taneisha Prioleau); three sisters, Lizzie Myers, Catherine Prioleau, and Velma Prioleau, two brothers, Jerry Prioleau, and Marvin Prioleau (Louella Prioleau); one uncle, Cephus Prioleau (Sarah Prioleau); eight grandchildren, Devon Wilson, Mya Wilson, Guy Castle, Charles Rice, India Eckels, Isaiah Eckels, Ivy Prioleau, and Victoria Prioleau; and a host of nieces, nephews, other relatives and friends.

Henry Prioleau was born to the late Blossom Nelson and Robbie Prioleau on October 15, 1939 in St. Stephen, a small town in Berkeley County, South Carolina. After a courageous battle with a terminal illness, he transitioned peacefully at his... View Obituary & Service Information

The family of Henry Prioleau created this Life Tributes page to make it easy to share your memories.

Henry Prioleau was born to the late Blossom Nelson and Robbie...

Send flowers to the Prioleau family.