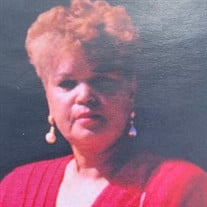 HATTIE BERNICE JONES was born on May 27th 1942, to the late Charles and Pauline Jones, in Lunenburg County Virginia. She was called home June 28h, 2021. Hattie was preceded in death by two sisters; Carolyn Ferrelle, Phyllis Johnson and three brothers; Charles Johnson, Robert Johnson and Marvin Johnson. Hattie received her education from the Baltimore City Public School system. She was a straight A student with a love for numbers, and mathematics. Not only was she astute but she was also a talented seamstress, well known for her exceptional prom and wedding dress designs. She was later employed as a Catalyst Researcher, constructing pacemakers for the heart becoming ill. Her spiritual journey led her to become a member of New Psalmist Baptist Church. At an early age Hattie moved from Virginia to Baltimore where met love of her life the late James Lewis Jones (affectionately known as Pop pop), They were married for 52 years years until he was called home in August 2011. You would never see one without the other; exuding the love definition of rel love. Out of their union three loving sons were born: James (Pee Wee), Marvin, and Andre Jones who was called home. (March 2019). Hattie loved the Lord, her husband of 52 devoted years, her sons and her grand and great grandchildren. Her passion and commitment to God and family was evident in all her efforts. Hattie was one of the most authentic and honest people that one could ever meet,she would tell it like it is. She enjoyed life with a love for shopping, sewing, and spending time her family. No matter how big or small the endeavor, she moved with purpose and intention, and her STRENGTH was undeniable inspiration to all! To know Hattie was to enjoy her vivacious personality. She was a natural born leader with a spirit full of strength, humor, and courage. She enjoyed spending time with her family especially her grand kids. She was the BEST grand and great grandmother you could ask for. When they were small she loved playing games and singing with them, showering them with love the BEST gifts and affection. She enjoyed chatting on the phone with loved ones, especially her sister Edith (Aunt Tae). These two shared a special bond, affectionately known as the snoop sister. Hattie had a zest for life an enjoyed telling jokes and being an overall ball of laughter and fun. She leaves to mourn two sons James and Marvin. One daughter-in-law Yvette, seven grandchildren Noel, Kevin, Marvin Jr., Andre Jr., Jamal Ashley and Courtney. Seven great grandchildren Kamauri, Nasir, Morgan, Amaya, McKenzie, Kayden and Serenity. Eight sisters Edith Ramsey, Mary Moore, Joyce Arrington, Marba Arrington, Janice Hurt, Karen Winkler, Sharon Jenning, Marsha Meeks. Two brothers Clarene Johnson and Tony Johnson. As well as a host of nieces, nephews, family and friends. Hattie will be truly missed by all, there will never be another so brilliantly crafted by the King of Kings. o

HATTIE BERNICE JONES was born on May 27th 1942, to the late Charles and Pauline Jones, in Lunenburg County Virginia. She was called home June 28h, 2021. Hattie was preceded in death by two sisters; Carolyn Ferrelle, Phyllis Johnson and three... View Obituary & Service Information

The family of Hattie Bernice Jones created this Life Tributes page to make it easy to share your memories.