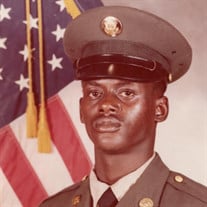 Obituary The righteous perish and no one ponders it in his heart,devout men are taken away and no one understands that the righteous are taken to be spared from evil. Those who walk uprightly enter into peace: they find rest as they lie in death. Isaiah 57:1-2 Harvey Lee “Sput” Smith was a mighty warrior. He was born November 4, 1957, in Richmond, Virginia to Mary Frances Smith Robinson. Tuesday, August 3, 2021 God called his servant home. Harvey was educated within Richmond Public Schools and graduated from John. F. Kennedy High School. While in Mosby Middle School, he began breaking track records. His athleticism continued flourishing at John F. Kennedy where he had numerous record-breaking seasons. During the summers, Sput worked at Fairmount Swimming Pool and earned the reputation as a very reliable and dependable life guard. After graduation from high school in 1978, he enlisted into the United States Army. While in the Army, Harvey competed in numerous competitive runs across the country and internationally. He won the “Workhorse Award” in Germany by outrunning 700 other participants. Harvey fought for family and country in the Persian Gulf War and Saudi Arabian War. He earned numerous military awards and medals including the Bronze Star for valiantly serving. Harvey was a proud soldier and retired as a Sergeant with an honorable discharge in 1998. After retiring from the military, he was united in holy matrimony to Nannie October 9, 1999. He gained employment with Richfood, Inc. For nearly 20 years, he was as a diligent forklift operator, until he became disabled. In his leisure, Harvey loved to grill and entertain family and friends. He also enjoyed dancing and to family was known as the “dancing bunny.” His favorite past-time activity was all things NFL “Red Skins.” He was an avid fan who attended all of their games, training camps and even mingled with the cheerleaders. Harvey was an amazing soul. At the age of 63 he accepted Christ. He was “no nonsense” but generous and always willing to help his fellow man. Sput was dependable, loving, protector of family and friends; very crafty, strong-willed and he was the bravest person we knew. He was preceded in death by his wife, Nannie Smith; mother Mary Frances Smith Robinson; and brother Samuel Smith. Harvey leaves cherished memories to his loving and devoted siblings, Marie Woods, Evelyn Hamilton, Mary Knightner, Joanne Robinson-Shands (Edward), Joseph H. Robinson Jr., Charles B. Robinson (Willa); sister-in-law, Nadine Smith; several nieces and nephews; devoted friends, Debbie Doumbie; a host of other relatives and friends. Facts!!! He fought until the bitter end. Forever in our heart!!

Obituary The righteous perish and no one ponders it in his heart,devout men are taken away and no one understands that the righteous are taken to be spared from evil. Those who walk uprightly enter into peace: they find rest as they lie in... View Obituary & Service Information

The family of Harvey Lee Smith created this Life Tributes page to make it easy to share your memories.

The righteous perish and no one ponders it in his heart,devout...