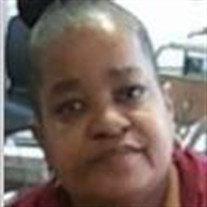 Gwendolynn Doreen Hamilton was born on July 23, 1950 in the small town of Roselle, New Jersey to the late Rev Jake Holmes, Sr. and Ruth Wilnette Holmes. She grew up in a Christian home with the nurturing of the Lord. Her father instilled moral values and urged Gwen to strive for the best that life has to offer. He would often tell us, “be particular!” Gwen was the oldest child of six siblings: Jake Holmes, Jr., Kevin Holmes (deceased) Sherolynn Coleman, Janell Terry and Dewayne Holmes (deceased). Gwen was adventurous, curious and ambitious. She was eager to graduate so she can declare her independence and move out on her own. She quickly discovered that being independent came with some challenges but Gwen was wise and knew how to survive despite some setback and hardships. Not long after she move from home she met a young man named Marius Hamilton, Jr. and fell in love and got married. Gwen and Marius had three lovely children, Takiah (deceased), Alecia, and Marius III. For years, they live in Newark, NJ and raised their family in that area. Gwen graduated from Abraham Clark High School in Roselle, NJ and directed her career as a CNA in several nursing facilities throughout Union County. After the passing of her husband, Gwen set her sights on Richmond Virginia. Her brother Jake had lived in Virginia for years and her two sisters Sherolynn and Janell also made Richmond their home. It wasn’t long after that Gwen followed. Having half of the siblings in Richmond was a grand reunion of the family. Once Gwen arrived here in Richmond she found a job working at Wal-Mart and continued to work there for four years before she became ill. Off and on throughout the years Gwen struggle with health issues but it never stopped her from being our big sister. Her presence was always a welcomed sight. We had tremendous respect for her. Although small in stature, she was tough and not to be played with. We knew that and so did those in her circle of friends. Nobody messed over GWEN. On the flip side she was pleasant, well mannered and a joy to be around. Here laughter would light up a room. She had a memory that would transcend years. We will miss our big sister. She live up to her role and made sure we were protected at all times. We love her and will miss her dearly. She proudly passes her legacy to her children and challenged them to set their goals high. Gwen is the proud mother of Alecia and Marius, III; grandmother of Akeim Morton, Brianna Bowers and Takarah Tabron; auntie to Damian Seaton, Jake Holmes III (Christina), Jarrad Holmes, Sr. (Rachel), Mark Ingraham, Jason Ingraham, Daniel Holmes, Amber Terry and Jordan Terry; sisters-in-law to Cynthia Holmes and Edna Holmes; brothers-in-law to Bud Coleman and Thomas Terry; a host of great-nieces and nephews, other relatives and caring friends.

Gwendolynn Doreen Hamilton was born on July 23, 1950 in the small town of Roselle, New Jersey to the late Rev Jake Holmes, Sr. and Ruth Wilnette Holmes. She grew up in a Christian home with the nurturing of the Lord. Her father instilled moral... View Obituary & Service Information

The family of Gwendolynn Doreen Hamilton created this Life Tributes page to make it easy to share your memories.

Send flowers to the Hamilton family.