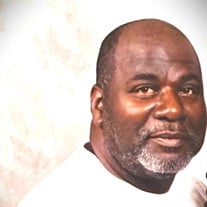 Gregory A. McGowens Sr., aka "Mack" was called home on February 19th, 2022, at St. Agnes hospital in Baltimore, MD. He was born on October 26, 1955, in Baltimore, MD, to the late Agnes (Parker) Wilson and Russell McGowens Sr.. He received his education at Baltimore City College, He later became a train enthusiast, turning over 37 years of employment at CSX Railroad before retiring. In 1975, Gregory married Nadine Sargent and out of this union, they had two beautiful children Gregory McGowens Jr. and Keisha McGowens. He later had another beautiful son, Jabriel McGowens, whom he shared with his life partner Jacqueline D. Scott, along with four bonus children; Raven, Latoya, Kandi, and Reginald Dobyns. He enjoyed all kinds of sports. His favorite teams were the Baltimore Ravens and the Baltimore Orioles. He had a heart of gold and went above and beyond to help anyone. Mack enjoyed spending time with his family and friends, who all knew him for his sense of humor and charismatic charm. Gregory was an amazing father and grandfather and will be greatly missed by all who knew him. Gregory is preceded in death by his brother, Derek McGowens; son Gregory McGowens Jr., and grandson, Jamar Waters. He leaves behind s legacy of love, one daughter, Keisha McGowens; son, Jabriel McGowens; two brothers Russell McGowens Jr., and Nathaniel Dowelll; two sisters, Sheila McGowens Best and Tru McGowens; eight grandchildren, Ajanae Clark, Karon Waters, Summer Hill, Savaili Harris, Gabriel and O'Rian Daniels, and Ardell and Karma Dobyns; his aunt, Angela Ligon and unce, Glenn Parker. Mack was an uncle to a host of nieces and nephews and a loving cousin to many. He is already truly missed. His wings were ready, but our hearts were not.

Gregory A. McGowens Sr., aka "Mack" was called home on February 19th, 2022, at St. Agnes hospital in Baltimore, MD. He was born on October 26, 1955, in Baltimore, MD, to the late Agnes (Parker) Wilson and Russell McGowens Sr.. He received... View Obituary & Service Information

The family of Gregory Angelo McGowens created this Life Tributes page to make it easy to share your memories.

Gregory A. McGowens Sr., aka &quot;Mack&quot; was called home on February...

Send flowers to the McGowens family.