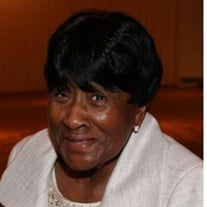 Grace Ann Lynch of 6 Station Circle Ct, Owings Mills, Md., departed this life on Tuesday April 13, 2021 at Meadow Park Rehabilitation and Health Center. Born January 3, 1924, Grace was the 2nd of eight children born to the late Annie (Hawkes) and Gilliam Oliver. She was a graduate of Carte G. Woodson High School in Hopewell, Va. Grace and her sister Mary Oliver moved to Baltimore, Maryland to pursue employment. Grace became employed at Bon Secour hospital as a dietician and retired after several years of employment. Grace married the late Issachar Lynch in May of 1956 and became the stepmother of Mary, Alsenders, Gloria, Gladys, and Rebecca Lynch and from that union Adrienne and Angelina Lynch were born. Grace had a great love for all her family and friends. She had a very calm loving spirit that everyone could attest to. She had a love for all the finer things in life including dancing, singing, children, sweets and especially Pepsi Cola. She also had a bird she loved named Pearly that she to talk. Grace was preceded in death by her husband Issachar Lynch, brothers Clarence, Gale and Floyd Oliver, Step daughter Mary and Gladys, Step son Alsenders and daughter Adrienne Roberts followed her mother home to glory one day after her passing on April 14, 2021. Grace to cherish her memories: her loving daughter Angelina C. Ross, son in law Earl Neal Ross, stepdaughters Gloria Stokes, Rebecca Yates, sister Esther Sessoms (Ben), Catherine Goodwyn (Floyd), one brother, Jacob Oliver, sister-in-law Evelyn Oliver and a host of Grand, Great Grand, and Great-Great Grandchildren, nieces nephews, cousins, other relatives and friends.

The family of Grace A. Lynch created this Life Tributes page to make it easy to share your memories.

Send flowers to the Lynch family.