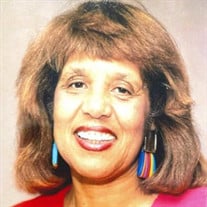 Gloria Lee Vickers Warren, daughter of the late Thomas Lee Vickers and Lattice Cole Vickers was born on July 19, 1937, in Durham, North Carolina. She was the oldest of four children, preceding the late Peggy Jane Vickers Alston, and surviving siblings Stanley B. Vickers, and Laverne D. Vickers Brooks. Her life ended on June 6, 2021, at Frederick Villa in Baltimore, Maryland. She was a source of strength, inspiration, and joy for so many family, friends, and acquaintances. Gloria was educated in the public school system of Chapel Hill, North Carolina and was a proud graduate of Lincoln High School. Upon graduation she attended Morgan State College in Baltimore, Maryland. At Morgan, she met and later married the love of her life, Reginald C. Warren on April 5, 1958, and from this union was born two sons, Reginald C. Warren, Jr. and Rodney C. Warren. They enjoyed traveling across the United States, stopping to see historic landmarks and scenic views. She was a devoted wife and mother who adored her two sons and always supported their dreams and ambitions. Gloria will be remembered as someone who loved to laugh and enjoy the company of family and friends. She always greeted others with a smile and compassion that warmed your heart. Gloria held a passion for learning evidenced by her academic achievements: an Undergraduate Degree from Morgan State College, a Master’s Degree from the University of Maryland School of Social Work, and a Doctorate Degree in History from Morgan State University. Gloria started her career at the Baltimore City Department of Social Services, spanning the professional ladder from Social Worker to Assistant Director. She served the Lord as a member of the New Shiloh Baptist Church and Choir. Her commitment to leadership and service to the community was exemplified as a Diamond Life member of the Delta Sigma Theta Sorority, Inc. Gloria will be cherished in memory by her beloved husband Reginald, Sr.; her sons and daughter-in-laws, Reginald, Jr. and Theressa Bush-Warren, and Rodney and Nannette Warren; loving grandchildren Malcolm, Clarissa, and Christina, and great-granddaughter Zhuri; her brother and sister-in-law Stanley and Minnie S. Vickers; her sister Laverne V. Brooks; cousin Carolyn Clark; nieces and nephews Theresa, Todd, Stephanie, and Nicole; goddaughters Anissa and Timera; and many other relatives and friends. -

The family of Gloria V. Warren created this Life Tributes page to make it easy to share your memories.

Send flowers to the Warren family.