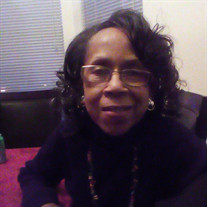 Gloria Ann Woolford Parker was born on April 26, 1940 in Cambridge, Maryland to the late James and Mamie Hopkins Woolford. She was the 7th of 8 children and the youngest daughter. She departed for her heavenly journey peacefully on Tuesday, February 1, 2022 at the age of 81. Gloria was educated in Dorchester County Public Schools where she graduated from Mace’s Lane High School, Class of 1958. After graduating high school, she attended Secretarial School. Gloria envisioned more for her life so she decided to move to Baltimore, MD with her son, Andre Woolford, Sr. She lived with her older brother, Wesley Woolford, prior to meeting her husband, Warren M. Parker, Jr. Warren and Gloria married on June 14, 1969 and their union brought two children into the world, LaWanda and Warren III. They were madly in love with each other and Warren affectionately referred to her as “Go-Go”. Gloria and Warren were devoted to each other and their marriage lasted for 30 years until Warren’s passing on June 17, 1999. Gloria worked numerous jobs prior to her career with the Baltimore City Health Department where she served for 36 plus years prior to retirement in 2001. Gloria had a passion for learning. While caring for her family, managing her household, and working in the Personnel Division for the city, Gloria decided to enroll as a part-time student at Morgan State University where she graduated with a Bachelor of Science degree in Business Administration in 1994. She continued her education and received a Master of Public Administration (MPA) from the University of Baltimore in 1997. Gloria was a member of St. Ambrose Catholic Church for over 50 years. She loved to read, bowl, exercise, shop, dance, go to the theater and listen to music. She loved her high school and served as Class President to Mace’s Lane Reunion Class of ‘58. While in retirement, Gloria enjoyed the time she spent as a substitute teacher with the Baltimore City Public Schools. Lovingly referred to as “GRANNY”, her grandchildren and great grandchild meant the world to her and so loved spending time with them and watching them grow. Gloria was preceded in death by her husband, Warren M. Parker, Jr., one granddaughter, Andrea Woolford, five brothers, Joe, Lilan, Wesley, Albert, and Merrick Woolford, one sister, Gladys Young, and BarbaraJean, her niece who she raised as her daughter. Gloria leaves to cherish her memory and legacy, three sons, Andre Woolford Sr., Warren Parker III (Brandi), and Ruffin Downes, one daughter LaWanda Parker Dates, seven grandchildren, Andre (Bud) Woolford, Jr., PFarro Dates, Blake Dates, Kayla Cummings, Warren Parker IV, Stori Downes, and Prince Downes, one great-grand daughter, MacKenzie Froneberger, her daughter-in-law Brandi Parker, her younger brother, Sonny Woolford (Elizabeth), two brothers-in-law, Roger Parker Sr. (Delores) and Anthony Smith Sr. (Eletha), the many nieces and nephews she raised as her own and a host of cousins and close friends. She may be gone from this earth but will never be forgotten: WE ALL SHALL MISS HER GREATLY!

Gloria Ann Woolford Parker was born on April 26, 1940 in Cambridge, Maryland to the late James and Mamie Hopkins Woolford. She was the 7th of 8 children and the youngest daughter. She departed for her heavenly journey peacefully on Tuesday,... View Obituary & Service Information

The family of Gloria Ann Parker created this Life Tributes page to make it easy to share your memories.

Send flowers to the Parker family.